Australia has a new world champion. Eleanor Patterson has won gold with an inspiring performance that delivered Australia’s first high jump medal at a world championships.

Patterson delivered the performance of her life, twice setting new personal bests including clearing two metres for the time, after being on the brink of elimination and out of the medals. 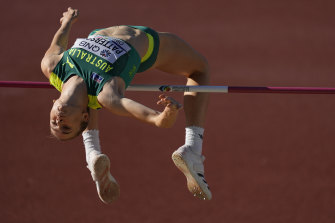 Eleanor Patterson claimed gold in the high jump at the world championships.Credit:AP

Patterson, the former world indoors silver medallist, was jumping just to stay in the competition after twice missing the height at 1.98m. On her third and last effort she cleared the bar. That kept her in the fight for medals with three other women. Her two misses at 1.98m, however, meant that she was sitting in fourth place.

The bar was put to two metres. The Glasgow Commonwealth Games gold medallist had never cleared that height before – her personal best was 1.99m.

The bar was put to 2.02m and Patterson cleared it at her first attempt. That vaulted her to the gold medal place after her rivals missed the height at first effort. Two, Italy’s Elena Vallortigara and Ukraine’s Iryna Gerashchenk,missed in their attempts and were eliminated. Vallortigara taking bronze. 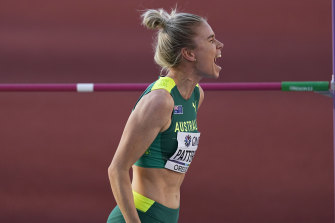 Patterson reacts during the final.Credit:AP

The field thinned to just two, Patterson and Ukraine’s Yaroslava Mahuchikh. Patterson was guaranteed at least silver. The bar was put to 2.04m.

Mahuchikh, jumping first, missed. Then Patterson hit the bar. Mahuchikh, the Tokyo bronze medallist who also won silver at the last world’s in Doha, then missed twice more meaning Patterson had secured gold before she had her final jump. She missed again but that matter not a jot, she had won gold.