Birmingham: Eleanor Patterson walked back onto the track the new world champion. For a year her coach had been telling her to walk and talk and train like a world champion. Now she is one.

On Thursday morning in Birmingham she arrived on the track the newly-crowned world gold medallist drawn to the track for a perfunctory qualifying round. After the high of winning her world gold in the US last month it was good to be back so soon on the track doing what she does.

“I don’t really notice how people look at me. I was just really happy to be out there. I’m no different to how I was before worlds but I’m walking with confidence, I know I belong out there in arenas like this, on the world stage and amongst the best,” she said. 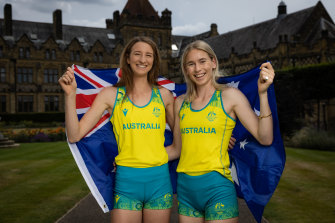 “I wanted to do as little as possible to get through to the final and I’ve ticked that box. Was wonderful to be able to get out there, get a feel for it before the final.“Got a feel for the track, got a feel for the atmosphere, which was phenomenal, so I’m really excited for Saturday morning.”

In the men’s high jump there were not enough entrants to have a qualifying round, but the women’s needed a quick round of qualifying to go through to the final. Patterson and Australia’s Olympic silver medallist from last year in Tokyo Nicola Olyslagers were both pleased they got a chance to have a dry run before the final.

“I preferred it in this instance. Made sense for me as well, hadn’t been out to see the track at all,” Patterson said.

“Going onto another major has been especially good after Eugene. If it was any other competition, maybe it would have been harder to come down, I don’t know why. But being here in Birmingham and the excitement around it I’m just continuing that excitement, to compete and to keep on going.”

Both Patterson and Olyslagers waited until the bar was lifted to 1.81m to jump just the once and qualify.

Olyslagers knew there would be few jumps needed and so took the opportunity to do extra jump in the warm up before competition began, though she didn’t try to jump too high over the low warm up height the bar is set at.

“It is actually a funny thing with high jump, if you jump too high over the bar you will actually hit it off with your feet so I was like none of that, no showing off, just do your job, be humble, be strong and get back out there for the final,” Olyslagers said.

The final will be in an unusual morning time slot in Birmingham on Saturday starting at 10.17am locally (7.17pm in Melbourne).

“It’s very strange for major in a final, but I’m not mad about it. We had a morning final at world indoors and I train in the mornings every day. I’m a morning person, so I can wake up and be prepped and ready to go whatever time it is,” Patterson said.

In the 1500m Stewart McSweyn was a late withdrawal with a flu, but Australia’s Ollie Hoare was superb in winning his heat and making the final in what will be one of the strongest fields in any event or race at the Commonwealth Games.

Hoare beat reigning world champion and the Olympic silver medallist Timothy Cheruiyot from Kenya in his heat, running the quickest time of the day in 3:37:57.

“Honestly I didn’t know what to expect, that field is extremely tough,” Hoare said.

The 1500m in Birmingham will have the three men who ran second, third and fourth at the Olympics, and Jake Wightman who just won the world championship gold in the US.

And of that quality field Hoare qualified quicker than any of them in what was a hard heat with runners knowing only the first five in each heat and then the next two quickest runners would advance.

Meanwhile, dual world champion Kelsey-Lee Barber is still testing positive to COVID and has felt unwell but has insisted she will be on the start line to back up her recent world championship with a Commonwealth gold.

The Commonwealth Games Authority and Australian team have cleared Barber to be able to compete in Sunday’s event despite the positive tests.

“I haven’t quite been symptom free but definitely not as sick as a lot of people you hear about I definitely feel pretty normal now but I was not quite right,” Barber said late this week from the team village where she is being kept away from other athletes.

“In the last couple of days I have been feeling better. I am still testing positive.”

“I have not been bed-ridden but I have not been quite right. I have been able to train and everyone has done everything they can to help but I have had to manage it, coming from Eugene and being jet-lagged and getting COVID I just had to be careful. I’ve just been trying to listen to my body.

“I will be on the start line.”

Get all the latest news from the Birmingham Commonwealth Games here. We’ll be live blogging the action from 4pm-10am daily.

New York and Berlin Marathons cancelled due to coronavirus