Olympic champion Sally Pearson said a postponement of the Tokyo Olympics this year would prove "impossible" for track and field athletes, who could have to prepare for three major events in one year if the Games are delayed until 2021.

Pearson, who retired last year, said her "whole sport" would be "under fire" if the Games, due to be held in July-August, were re-scheduled due to coronavirus fears. 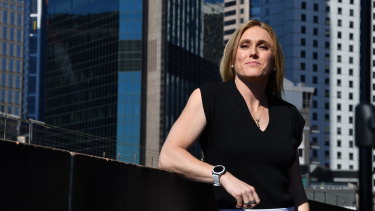 Pearson said her whole sport would be “under fire” if the Games were either postponed or delayed.Credit:AAP

Olympics minister Seiko Hashimoto told Japanese parliament there was the option of the Games being postponed until later in the year, and there has also been discussion about whether delaying the Olympics until the same dates in 2021 is possible.

Neither option would be good news for athletes, according to Pearson.

"Both options are quite terrible really," Pearson said. "It would really put us into turmoil terms of an organisation and admin problem, the athletes would be highly disappointed.

"If it was [postponed] it would put a lot of pressure, mentally and physically on the whole sport, not just on the athletes themselves."

The World Indoor Championships, which were set to start in March in China, have already been pushed back by a year by World Athletics to March 2021.

If the Olympics were also moved to 2021, it could see track and field athletes having to train and peak for a World Indoor Championships, an Olympics and a World Championships all in one year.

"That would put a lot of pressure on the athletes to be able to step up three times in one year," Pearson said. "That in itself is almost impossible for an elite athlete to be able to do so."

Multiple sports events around the world have been cancelled due to the virus, which has killed more than 3000 people in China and spread to more than 60 nations including Japan.

On Wednesday, the International Olympic Committee president and executive board moved to dampen growing speculation about the Games being cancelled or moved.

Pearson said a cancellation or postponement of any sort would be a tragedy for athletes, many of whom only get one shot at the Olympics.

"The Olympics is the pinnacle sporting event in the world and it only comes around every four years," Pearson said. "Usually people only get to do one, if this is what they trained for for this year, and then it got canceled or postponed, then that could be someone's one and only chance to ever make the Olympics and they don't get to go."

Shifting the Olympics to 2021 could theoretically open the door for the 33-year-old, who is currently five months pregnant, to return and compete but Pearson said she would not be looking to make a Serena Williams-esque comeback.

"I suppose a lot of females are continuing to do elite level training, which I am certainly not doing, and would probably take me a little longer to get back If I was to do any sport afterwards," Pearson said. "Definitely ruling it out if it was next year, I certainly would have enough time."

Pearson, who is currently promoting Booking.com ahead of the ICC Women's T20 World Cup final and International Women's Day, said she doesn't think the Olympics could be moved to another country either.

"The Olympics does take its toll on a country," Pearson said. "It would be certainly a huge ask for someone to be able to do that."

Boston Marathon 2020 postponed due to coronavirus

UFC 250 Live results, analysis — Aljamain Sterling, Sean O’Malley steal spotlight
Recent Posts
This website uses cookies to improve your user experience and to provide you with advertisements that are relevant to your interests. By continuing to browse the site you are agreeing to our use of cookies.Ok