Los Angeles: Nothing has ever come easily during the Clippers' 50-year history.

After moving to Los Angeles in 1984, they recorded losing records in 17 of their next 19 seasons. 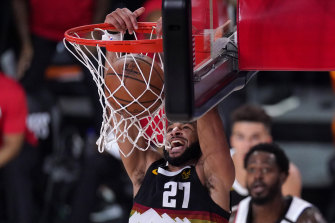 Jamal Murray dunks for Denver during the Nuggets’ NBA semi-final game six win over the Clippers.Credit:AP

The Clippers were outscored by 29 points in the second half as their 19-point lead in the third quarter dissipated in the NBA's bubble near Orlando. Denver made seven of its nine three-pointers in the fourth quarter and shot 61 per cent from the field overall during the final 12 minutes. They played like a team that called themselves "loose" and "relaxed" facing elimination.

The Clippers, meanwhile, made six of their 18 shots in the final quarter while displaying none of the poise that helped them weather Denver's bid to get back into the game during the first half.

The Clippers trailed 8-2 within the first three minutes of the game but scored 11 unanswered points during the next three for a quick five-point lead. With backup centre Montrezl Harrell struggling throughout the second round, coach Doc Rivers adjusted his rotation by making back-up forward JaMychal Green his first big-man substitute and playing him alongside centre Ivica Zubac, with the intent of guarding Jokic with the seven-foot Zubac as often as possible.

Green immediately followed an offensive rebound with a lay-up and finished the first quarter with six points, more than he had scored in his last two games combined.

In the Clippers' game five loss, Rivers lamented the undisciplined play late in the first half that loosened his team's hold. On Sunday, a 10-2 run by Denver cut its deficit to four with eight minutes before halftime and just two with five to play. But there was no repeat of the game five malaise as a 16-2 Clippers' run created a 16-point half-time lead.

Two minutes into the third quarter, Nuggets star Jamal Murray fell hard to the court after having his shot blocked at the rim by George. Writhing in pain, Murray did not get up. George did and stepped into an open three-pointer for a 19-point lead. Murray stayed in the game, battered but unbroken, much like his team.

As they have since falling behind Utah 3-1 in the first round, the Nuggets refused to quit and cut a 19-point Clippers lead to one during a six-minute span in the third quarter that saw the Clippers miss 10 consecutive shots. George was a lone bright spot, scoring 10 of his team's 16 points in the quarter.

LeBron James says no excitement or joy in sports without fans