Houston Rockets general manager Daryl Morey has announced he will step down from his role in November after 13 seasons at the helm of the franchise.

Executive vice-president of basketball operations Rafael Stone will be promoted to general manager.

“For me, it was just a great run,” Morey told ESPN.

“Personally, the timing worked for me. My youngest son just graduated from high school, and it was just the right time to see what’s next with family and other potential things in the future. 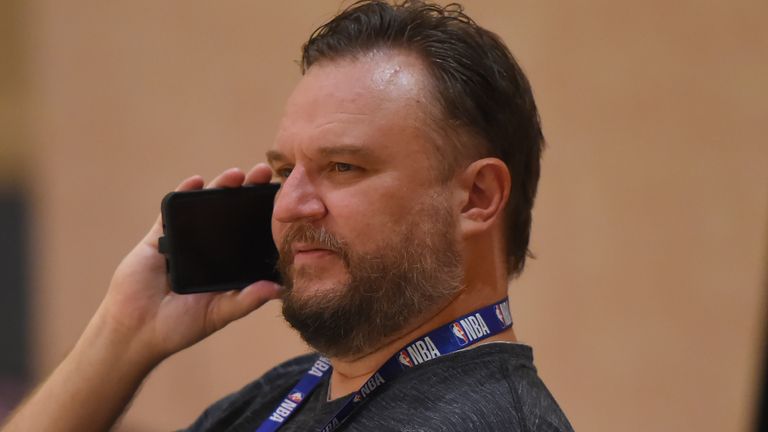 Morey plans to remain with the team as an adviser, assisting in the search to find a replacement for head coach Mike D’Antoni.

The club have been interviewing candidates to replace D’Antoni with Stone playing a big role in those discussions.

Morey is considering moving on from sports, according to ESPN.

Rockets owner Tilman Fertitta told ESPN: “He had always said, ‘I’m not going to be here forever,’ and, ‘At some point, I might want to go back to the East Coast’.

“I didn’t think it was going to happen. I knew that this was that year, but Daryl’s been here (almost) 15 years. I was surprised, but yet I remembered the previous conversations. He’s reminded me of that a few times.”

The Rockets have the longest streak of consecutive playoff appearances in the NBA at eight.

Morey caused an international uproar last year when he tweeted support for anti-government protesters in Hong Kong, posting an image that said: “Fight For Freedom. Stand With Hong Kong.”

His tweet was in reference to pro-democracy demonstrations in the semiautonomous Chinese territory that had been mired in escalating violence between protesters and law enforcement.

The tweet caused businesses in China to cut ties with the Rockets and broadcasters there refused to air the team’s games this season. NBA telecasts in China, however, resumed during the recent NBA Finals.

Morey said Fertitta’s support for him never wavered, even in the wake of the tweet.

“From Day 1 Tilman has been behind me … and I will always appreciate that,” Morey said. “And it’s never been a factor in anything here.”

Fertitta scoffed when asked if he thinks he can repair some of the business relationships the team lost in China now that Morey is leaving.

“It isn’t even anything that’s popped in my head or considered,” he said. “I didn’t even think about the two tied together.”

Want to watch even more of the NBA but don’t have Sky Sports? Get the Sky Sports Action and Arena pack, click here.

When there’s nowhere to work out, NBA teams are bringing the gym to the players