Jaylen Adams has been ruled out of the second game of the NBL grand final series due to a hamstring injury, but the Sydney Kings are clinging to a glimmer of hope he could recover in time to play at home next week.

The NBL’s most valuable player limped off early in the fourth quarter of Sydney’s 95-78 win over the Tasmania JackJumpers at Qudos Bank Arena on Friday night, sending a massive scare through the Kings’ camp. 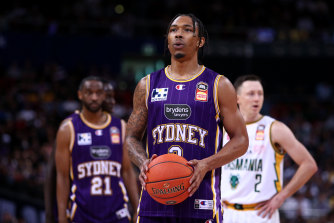 Instead of flying on Saturday to Hobart with the team for Sunday’s game two, the 26-year-old remained in Sydney and had scans on the injury, which the Kings described in a statement as a “low-grade” hamstring strain. The statement expressed the hope that Adams might be available for Wednesday night’s game three back at Qudos Bank Arena.

The results from those scans are expected on Sunday, and the team says Adams’ availability will be reassessed once they land, but it would appear he is at long odds to participate in the rest of the grand final series. 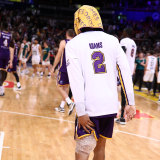 “Once we have the test results back we will be in a better position to make a determination on the extent of Jaylen’s injury,” Kings chief executive Chris Pongrass said.

“The best news for us would be getting Jaylen back for game three and until we know any differently we will treat Jaylen’s injury as a day-to-day proposition.”

The JackJumpers, who have made the grand final in their first NBL season, were outclassed in game one but Adams’ absence gives them a potential opening to get back into the best-of-five series.

The Kings led 73-58 when Adams withdrew from Friday’s contest, though, and will be heartened that they were able to continue their dominance over the JackJumpers without him.

Adams, who contributed a game-high 18 points and three assists in just 22 minutes of court time against the JackJumpers, appeared to be in serious pain after the injury. He immediately went into the Kings’ rooms and returned with ice strapped to his left hamstring – the same one that has repeatedly troubled him this season. His movement for the injury was innocuous, landing awkwardly under the rim in a routine passage of play.

The star playmaker had his partner and family fly in from the United States for the series but they, and Kings fans, will be counting on a favourable set of scans – or a miracle recovery – for him to be involved again.

This season, the Kings were 19-5 with Adams on deck but lost three of the seven games they didn’t have him for.

But broadly speaking, history is on Sydney’s side: all but one of the last 24 grand final series in the NBL have been won by the team that took the first game.

They will, however, need to find another avenue to the basket if Adams doesn’t return – or hope that the likes of former NBA champion Ian Clark, who tipped in 17 points in game one, can carry more of the scoring load.

Jaylin Galloway will replace Adams in Sydney’s line-up on Sunday.

Gonzaga beats UCLA: What we learned and what it could mean for college basketball in March