Anthony Davis scored 43 points and LeBron James added 36 to lead the Los Angeles Lakers to a 131-122 victory over the Portland Trail Blazers to win the western conference first-round series in five games.

Davis was 14-of-18 shooting and collected nine rebounds, while James made 14 of 19 shots and recorded 10 rebounds and 10 assists to increase his NBA playoffs 30-point, triple-doubles record to 13.

Los Angeles won a playoff series for the first time since beating the Denver Nuggets in the first round in 2012 during Kobe Bryant's tenure. 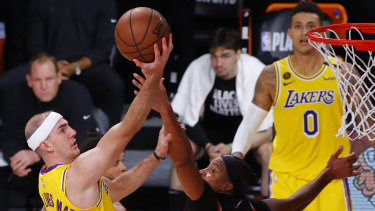 The Lakers will face the winner of the series between the Houston Rockets and Oklahoma City Thunder in the conference semi-finals.

CJ McCollum recorded 36 points and seven assists and Carmelo Anthony added 27 points for the Trail Blazers, who were without Damian Lillard. The five-time All-Star returned to Portland to have his sprained right knee examined. Lillard suffered the injury in Monday's game four.

Los Angeles won the final four games of the series after Portland prevailed in game one.

Kentavious Caldwell-Pope added 14 points and Dwight Howard had 11 for the Lakers. Los Angeles shot 54.5 percent from the field, including 14 of 36 from three-point range.

Jusuf Nurkic registered 16 points, 10 rebounds and five steals, Gary Trent Jr. also scored 16 points and Anfernee Simons had 13 for Portland. The Trail Blazers shot 47.3 percent from the field and made 13 of 27 from behind the arc.

Portland trailed 100-92 entering the fourth quarter before scoring the first eight points, tying the score on a three-pointer by Simons with 9:46 remaining.

Trent connected on another three-pointer to pull Portland within two before Davis scored the next nine points, including back-to-back dunks to make it 123-112 with 3:39 left. James added a basket 38 seconds later to end the decisive 11-0 spurt. 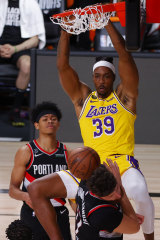 Earlier, Caldwell-Pope drained two three-pointers and James knocked down one during a 13-0 surge that saw the Lakers open up a 90-76 lead with 6:19 left in the third quarter. Los Angeles led 100-92 entering the final stanza.

The Lakers finished the first half with a 9-1 burst to knot the score at 68 at the break. James had 24 points for Los Angeles and McCollum scored 21 for the Trail Blazers.

In LeBron vs. Zion Round 1, King James shows the NBA he still reigns

Could Bam Adebayo be the Heat’s answer to stopping Giannis Antetokounmpo in the playoffs?