LeBron James has always been a big Ben Simmons fan, saying last year the “sky’s the limit” for the Aussie superstar.

Unfortunately the sky looks to have come falling down on Simmons — at least in Philadelphia — as speculation rages about his future after the 76ers’ latest playoffs implosion.

The 24-year-old has been in the headlines as his personal on-court troubles became the overriding narrative behind Philly’s failure — and provided NBA talking heads with enough material to last the entire off-season.

What happened this week?

The Sixers have teased about being genuine championship contenders for much of that time without ever making the required leap and now frustrated fans and pundits are questioning whether it’s time to blow everything up and start again.

Simmons is a central figure in that discussion. He looked like a broken man when he refused to go up for a wide open dunk in the final quarter of Game 7, instead dishing off to a teammate under pressure because he was so low on confidence on offence.

His unwillingness to shoot hurt his team badly. In the final six games of the series against Atlanta, Simmons attempted just one fourth quarter shot and scored just six fourth-quarter points across all seven matches. He also made just 25 of 73 free throws – the worst percentage in playoff history by anyone with a minimum of 70 shots from the charity stripe.

Simmons and Joel Embiid were supposed to be the pillars Philadelphia built a championship-winning outfit around after the Aussie was taken as the No. 1 Draft pick in 2016. But it was Embiid who was most scathing of his teammate after Game 7, pointing to Simmons’ aborted dunk as the turning point in the game. What’s the reaction been?

Shaquille O’Neal turned things up to 11 by declaring on TV he would have knocked Simmons out after Game 7 if they’d been sharing a locker room — and the overwhelming sentiment from the basketball world has centred around it being time for Simmons and the Sixers to break up.

Lakers legend Magic Johnson, sportscaster Stephen A. Smith and former NFL star turned media personality Shannon Sharpe have been among those saying Simmons and Philly are no longer the perfect match.

Trusting the process hasn’t worked. Simmons can shine during the regular season but pundits say he’s gone missing when it matters most in the playoffs too often, and can’t lead Philly to the promised land.

“Simmons’ inability to either develop a consistent jump shot or willingness not to use it has hampered the team in four consecutive playoff runs,” wrote Chris Franklin of NJ.com.

Sixers beat writer Kyle Neubeck said no matter what pieces the 76ers put around Simmons, the same problem remains — he’s too tentative at crunch time and can’t grab a playoff game around the throat like a point guard needs to.

Vincent Goodwill of Yahoo Sports added: “Championship windows don’t stay open long in today’s NBA, and it seems like three years have been squandered with the Simmons experiment, people talking themselves out of what they see and into what they’re hoping for.

“For things to improve, the answer is simple: The 76ers must trade Simmons if they’re as serious as they claim.”

Trading Simmons may not be the answer to all of Philadelphia’s woes, but plenty are in agreement it’s a step the Sixers need to take if they’re to stand any chance of improving on their recent playoff busts.

There’s every chance Simmons could be put on the trade table if the Sixers no longer have faith in him. An ESPN report during the week suggested up to a dozen rival teams would be interested in poaching the 24-year-old if he became available.

Simmons’ agent, Klutch Sports CEO Rich Paul, met with 76ers officials to discuss what options were open. ESPN reported Paul talked with Philadelphia general manager Elton Brand and head of basketball operations Daryl Morey about the future — but no trade request was made and the Sixers allegedly said they were committed to keeping Simmons on their books.

Complicating matters for Philly is Simmons still has four years and $AUD194 million to run on a max contract, which doesn’t expire until 2025. It was never the plan to get rid of him this soon.

After another sobering playoffs campaign, Simmons’ value is at an all-time low so moving him on now might make it tough for Philly to compensate and trade in a high-profile player to make a deal worth it. The Sixers would need a big scalp in return to offset Simmons’ contract worth but after seeing him flop against the Hawks, will teams be willing to part with a tasty enough trade package that appeals to the Sixers?

Sportscaster Stephen A. Smith told First Take any suggestion the Sixers want to keep Simmons is a “lie”.

“It’s just that they’re not interested getting trash back for him,” Smith said. “Hell yeah, they’ll move him if it’s the right offer. They won’t move him for garbage, but I know a lot of people in Philly.

“Let them get the right offer and Ben is gone.”

As ESPN’s Bobby Marks told The Lowe Post podcast: “The guy’s got $147 million ($AUD194 million) left (on his contract). That’s a big number for a non-offensive player.” If it doesn’t make financial sense to let Simmons go, then the Sixers will need to commit to either improving his shooting and making him an offensive force in the postseason or take yet another crack at what they’ve been trying (and failing) to do for the past few seasons – find the right combination of players around Simmons and Embiid to make the team championship material.

But you know what they say about insanity and doing the same thing over and over while expecting different results.

How did it get to this?

There’s always plenty of hype around a No. 1 draft pick and it was no different with Simmons. He was clearly something special at Louisiana State University but missed what should have been his debut NBA season with a serious foot injury.

When he finally arrived on the big stage he oozed class. His vision and passing ranked with the best in the league and Simmons was unstoppable in transition. It’s why he walked away with the Rookie of the Year award in 2018, beating out Utah’s Donovan Mitchell.

The sublime distribution and ability to rapidly turn defence into offence are still very much alive in Simmons’ game — it’s why he’s a three-time NBA All-Star, the most recent selection of which came this year.

But since he entered the NBA Simmons has consistently been dogged by doubts about his shooting. He can score in the paint — dunks, lay-ups and hook shots are his jam. But he’s always struggled from the perimeter.

And three-pointers? Apart from the extremely rare long-range bomb in pre-season, forget about it.

During the regular season he could paper over those cracks. The constant refrain from his defenders was: Who cares if he can’t shoot, if he’s able to rack up 25 points a game from the paint doing it his way?

Then there are his attributes without the ball. Simmons committed himself to becoming the NBA’s best defensive player — and narrowly missed out on being named the NBA Defensive Player of the Year this season, beaten by Rudy Gobert of the Jazz. 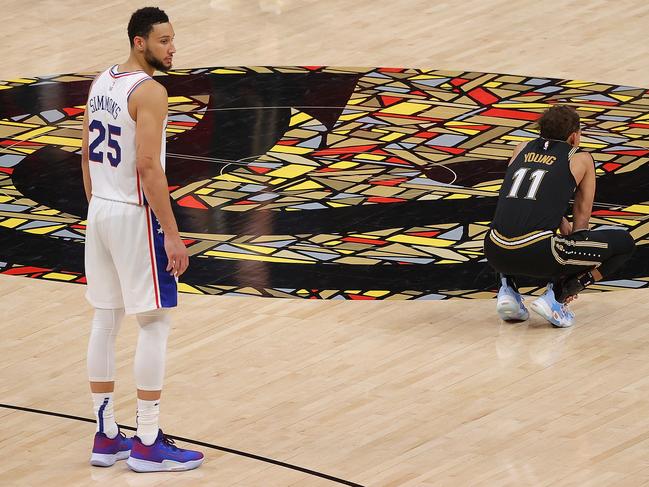 Where to now for the Aussie? (Photo by Kevin C. Cox/Getty Images)Source:Getty Images

Along with Embiid, Simmons has been the main man in Philadelphia but hasn’t dominated in the playoffs. Exits at the hands of the Celtics (2018), Raptors (2019) and Celtics again (2020), before the bumbling effort against Atlanta this year have put the blowtorch on Simmons’ ability to stand up in big games.

It’s why, when asked in the aftermath of the Hawks disaster if Simmons could lead the 76ers to a championship as point guard, coach Doc Rivers admitted he didn’t know.

Atlanta exposed a major flaw in Simmons’ game. Sure, he’s never been one to shoot from range, but in this series he was worried to go to the paint and risk being fouled.

The hack-a-Ben strategy the Hawks adopted meant Simmons was regularly being sent to the free-throw line, where his confidence was shot and his accuracy abysmal. The more he had the ball in his hand in scoring positions, the more likely it was Simmons would be fouled and cough up easy points from the charity stripe, so he too often palmed the scoring responsibility off to his teammates.

It’s why he was benched in the crucial final minute of consecutive games during the week.

Whether Simmons is given the chances to work on his shooting in Philadelphia or cut loose is what everyone’s waiting to find out.