Ben Simmons was forced out of Philadelphia's NBA showdown with Milwaukee midway through the first quarter after he aggravated a back injury.

Simmons winced in pain after going up for a lay-up and left the court, heading straight to the locker room. 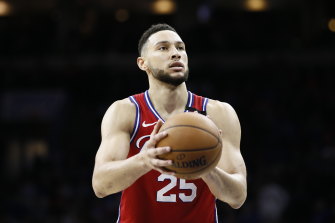 Ben Simmons had to leave the game early.Credit:AP

The Australian star sat out the the 76ers' overtime victory over Brooklyn on last week due to lower back tightness – the game was Philadelphia's first back from the All-Star break.

Simmons made both his field goals and one of two free-throws against the Bucks for five points in less than five minutes.

In earlier games on Sunday (AEDT), the Los Angeles Clippers appeared disjointed and unsure of themselves as they lost 112-103 at home to Sacramento.

Not even 31 points from Kawhi Leonard and a comeback from 14-points down in the second half were enough for the hosts.

Kent Bazemore scored a season-high 23 points while Bogdan Bogdanovic added 20 as the Kings beat the Clippers on the road for the second time in less than a month.