The Atlanta Hawks have rallied from a 26-point, second-half deficit to stun Ben Simmons and the Philadelphia 76ers 109-106 at home and take a 3-2 series lead in the eastern conference semi-finals.

Game six in the best-of-seven series will be played on Saturday (AEST) at Atlanta. 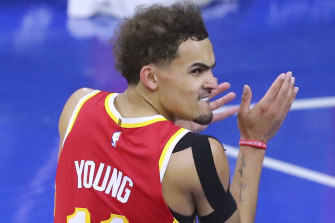 The Hawks trailed by 18 points entering the fourth quarter before outscoring the 76ers 40-19 in the final period. Atlanta never led until Trae Young made three free throws with 1:26 to go for a 105-104 advantage. Young scored a playoff-career-high 39 points.

Sixers guard Seth Curry produced a playoff-career-high 36 points, including seven three-pointers. Simmons continued to struggle from the free throw line, going four of 14, and wound up with eight points.

When Curry dropped in his third three-pointer, the Sixers led 51-31 with 5:25 left in the second quarter.

Embiid soon connected on a tough turnaround jumper from the corner for a 58-34 lead with 2:07 left.

The Hawks struggled early with their halfcourt offensive execution thanks in large part to suffocating defense by the Sixers.

Embiid knocked down his first eight shots and had 24 points and 10 rebounds by half-time. It was a major upgrade from game four, when Embiid went zero for 12 in the second half.

Atlanta scored four quick points to open the third before the Sixers responded with an 8-0 run for a 70-44 advantage.

The Sixers maintained a large lead and were on top 87-69 at the end of the third. Young missed a deep 3-point attempt from the top of the key in the waning seconds of the third.

Philadelphia soon came back with consecutive baskets from Embiid and Curry and pushed ahead 93-78 with 8:37 remaining.

Young was fouled by Matisse Thybulle on a three-point try with 86 seconds left and made all three free throws to put Atlanta ahead by one. Gallinari hit a jumper on the Hawks’ next possession for a 107-104 lead to complete a 13-0 run.

Seven big NBA trades we want to see this week