Melbourne United aren't making up the numbers and they won't be bowing down to NBL title favourites Sydney Kings when their semi-final series tips off on Saturday night.

While the Kings were on top of the league all season, Melbourne didn't secure their finals place until the last day of the campaign – yet they still believe they can take down the Kings and make a third consecutive grand final series.

United NBA import Stanton Kidd said his side was ready to take the game to Sydney at Qudos Bank Arena on Saturday. 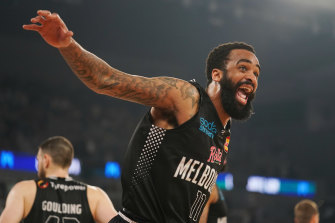 Stanton Kidd says Melbourne United are full of belief ahead of their semi-final series against the Sydney Kings.Credit:AAP

"It's not 'we made it, that's good for the club, good for the sponsors and now let's go get swept and go home'.

"Nah. We coming to play. We know Sydney is ready to play. The big thing is focusing on us."

Melbourne coach Dean Vickerman has a side who are as healthy and confident as they have been all season, although reserve guard Sam McDaniel had his eyebrow spilt open by an accidental elbow on Thursday.

The Kings beat Melbourne 3-1 in games this season and former United point guard Casper Ware has averaged 28 points a game against his former club compared to 18 points a game overall.

"The numbers don't lie about what he has been doing to us compared to the rest of the league," Vickerman said.

"We have to make his life tough, limit his catches and hopefully put him in position where he's shooting the shots we want him to shoot, not the ones he wants to take from half-court or wherever else he has been shooting from."

Vickerman said all the pressure was on the Kings, who haven't won a title since 2004-2005 when Brian Goorjian coached the side.

"I think there is absolutely more pressure on Sydney," Vickerman said.

"If we can do that then the pressure starts to build. If we put some scoreboard pressure on and get our scout right then we can get some pressure on them."