Southside Flyers have been quick to stamp their mark on the WNBL, after sealing a grand final spot in their first season in the league.

The Flyers, who took over the Dandenong Rangers licence in the off-season, beat Adelaide Lightning 82-79 in Adelaide to claim a 2-0 win in their best-of-three semi-final series. 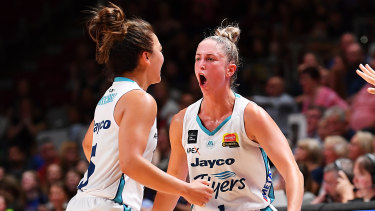 Southside shot a blazing clip from outside, racking up 12 of 25 from the three-point line with all five starters scoring in double-figures.

Questions were raised about the Flyers with captain and WNBL All-Star five player Jenna O'Hea out with a broken wrist, but this series they went to a three-guard line-up and kept winning. If O'Hea passes tests on her wrist this week she could possibly be back for the grand final where they will  play either Canberra Capitals or the Melbourne Boomers.

Flyers guard Bec Cole was relentless in firing up her side with 19 points, 10 rebounds, five assists and five steals as she sensed her chance return to the grand final series.

"This is a bit surreal but I'm taking this all in because when you get to senior basketball you realise it's so hard to get to the championship series," Cole told Fox Sports. 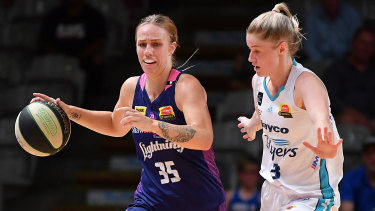 Flyers guard Aimie Clydesdale came into the starting five for O'Hea, and despite only scoring in double figures twice this season knocked down a game-changing 18 points including four three-pointers.

Adelaide's WNBA centre Brianna Turner (25 points, 18 rebounds) and import forward Kathryn Westbeld (18 points) lifted with the season on the line, as did Opals guard Lauren Nicholson (16 points) who needed an injection pre-game to play through a foot injury.

The Lightning were looking to play at a rapid fire tempo in hope of tiring out the undermanned visitors, but struggled to make a dint as the Flyers took a 27-26 lead into quarter time.

Southside pushed their lead out to double figures in the second term as all five starters found their groove led by Clydesdale who had 13 points by half time, with her club up 51-43 at the main break. 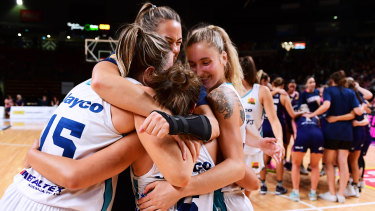 Dream debut: The Flyers celebrate after sealing a spot in the WNBL grand final series.Credit:Getty Images

Adelaide lifted in the third term and the Flyers looked like they were tiring as their shots started missing. The home side were trailing by 11 points but fought back to tie the scores, with only a buzzer-beating three off the backboard from Cole giving her side a 66-63 lead heading into the last.

The Flyers regained their shooting touch to start the final term and soon has their lead back to double-figures, but the Lightning made a late run behind Nicholson cutting the lead to three points before Cole pulled in the final rebound.

The Flyers will host game one of the WNBL grand final series against either Canberra Capitals or Melbourne Boomers at Dandenong Stadium on March 1 at 5pm AEDT with game two on March 4 at 7.30pm AEDT and game three, if needed, on March 8 at Dandenong at 1pm AEDT.

LA Clippers to sign Joakim Noah, according to reports