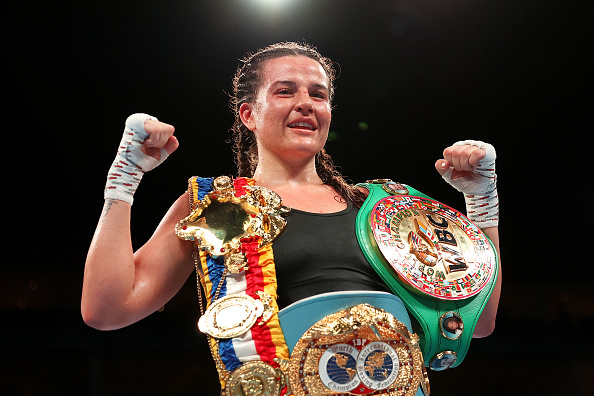 Chantelle Cameron started 2022 firmly on the road to undisputed in the women’s super-lightweight division.

By this point in the year, the 31-year-old would have hoped to have joined the likes of Katie Taylor, Claressa Shields, Jessica McCaskill and Franchón Crews-Dezurn in completing a clean sweep of all four major world titles in her weight class.

But the Northampton fighter has endured an agonising wait. Last October she beat Mary McGee to unify the WBC, IBF and Ring Magazine titles. It left her on collision course with WBA and WBO champion Kali Reis who picked up the latter of those belts with victory over Jessica Camara in November.

The fight never came however much to the exasperation of Cameron, who has lost sponsors and more importantly, momentum, while waiting for what was meant to be the biggest fight of her life.

‘It’s been very frustrating, very annoying to be honest,’ Cameron told Metro.co.uk. ‘It has delayed my career and set me back. It has been pretty rubbish.

‘I have no idea why we haven’t had the fight made yet. No medical reports, no explanation, absolutely nothing. But I do wish her [Reis] all the best. Whatever is happening, health is more important than boxing at the end of the day and I do hope she is okay.

‘For me, it would have been nice to have that understanding of what is happening.  A timeline, maybe, keeping me in the loop. But I was left to my own devices, and it has affected my career quite a bit.

‘I went under the radar, lost sponsors, not been active. I had momentum and now I am having to get that back again.’

Cameron, who has won all 15 of her professional fights, can take out some of that frustration on Victoria Noelia Bustos when she returns to the ring on the Joshua Buatsi vs Craig Richards undercard tonight.

It is not the fight she wanted, but one that will offer a useful workout having been left on the sidelines for over six months.

Her Argentine opponent is a two-weight world champion herself, having fought Katie Taylor and Cecilia Braekhus within the last four years.

‘I have got to get the win to keep moving forward,’ Cameron said.

‘I didn’t want to take an interim fight and just take on anyone. It had to be a good test for me. I’m not going to get better if I just take easy fights against people just turning up.

‘I picked Victoria because I know she is tough, she has boxed everyone, she has never been stopped and is a former two-weight world champion so it made perfect sense to challenge myself and show people I am at this level.’

Fights to crown an undisputed world champion represent the most prestigious occasions in the sport but Cameron’s journey illustrates just how exhausting the process can be. What was meant to be a clear pathway remains littered with obstacles.

She hopes for clarity in the coming weeks and months and with women’s boxing delivering some of the biggest fights in the sport this year, Cameron hopes her showdown with Reis will mark another huge night.

‘If you had asked me last year, I would have been so optimistic about fighting for undisputed. But you know how it is, life is full of ups and downs and things came crumbling down.

‘It is all ups and downs in boxing. Nothing is plain sailing, but I have had enough of the downs, I am ready to for a smooth path to the top.’