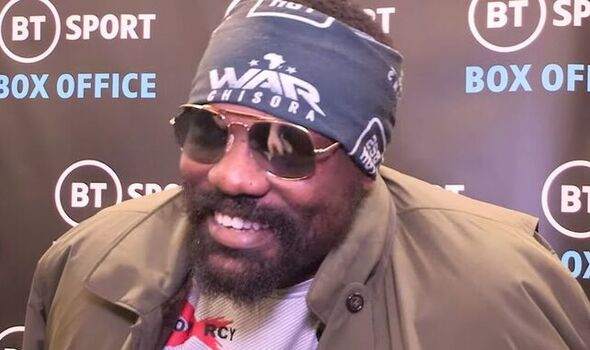 Derek Chisora left one reporter scratching his head after his risqué reply to a question about retirement. There have been calls for Del Boy to retire from the sport for a couple of years now, particularly after his second fight with Joseph Parker in which the Brit was rocked multiple times en route to a one-sided decision loss.

A victory over Kubrat Pulev in his last outing seemed like the perfect time to step away. But Chisora – still searching for that next big high – will now take on WBC and lineal heavyweight champion Tyson Fury for a third time on December 3 at the Tottenham Hotspur Stadium.

In their previous encounters back in 2011 and 2014, The Gypsy King left little doubt with two conclusive victories. Last time out, he became only the second man to stop the grizzled veteran via tenth-round retirement.

Since then, Chisora has only been stopped once more – a violent eleventh-round knockout defeat to Dillian Whyte during their rematch. Few have given Chisora much of a chance against Fury the third time around given the original results and the 38-year-olds noticeable decline over the last few years, but Rob Tebbutt wanted to know what would happen if Chisora was to win and what his next steps would be.

When asked if he will retire should he overcome the odds and defeat Fury on fight night, Chisora told iD Boxing: “I don’t know, it’s like getting with the hottest chick and you go to a hotel room and you bust a nut. Should you carry on? Or should you pack your bags and go? You carry on for more rounds until you can’t do it anymore, that’s it.”

In a world in which promoters protect their boxer’s undefeated records and carefully hand-pick fights, Chisora is a breath of fresh air. The throwback fighter has fought many of the best in his era including the aforementioned Parker, Fury, Whyte, David Haye, Vitali Klitschko, and Oleksandr Usyk.

Fury delivers Whyte-Franklin verdict – ‘Could be a difficult night’

No matter the odds stacked up against him there is no doubt that Chisora will bring the fight every time he steps in the ring – something Fury is all too aware of. “I will not underestimate Derek Chisora,” said Fury at a recent press event.

“God, forbid I got beat, it won’t be for the fact that I had an injury or I didn’t train hard enough, it would be the fact that I lost to a better man on the night. We’re going to have a fight and that’s it. It’s going to be a good fight too, because he doesn’t shy away and I’m running nowhere, so someone is getting chinned.”

Floyd Mayweather's next exhibition fight will take place on a HELIPAD

Floyd Mayweather Dubai exhibition on helipad rescheduled for this weekend