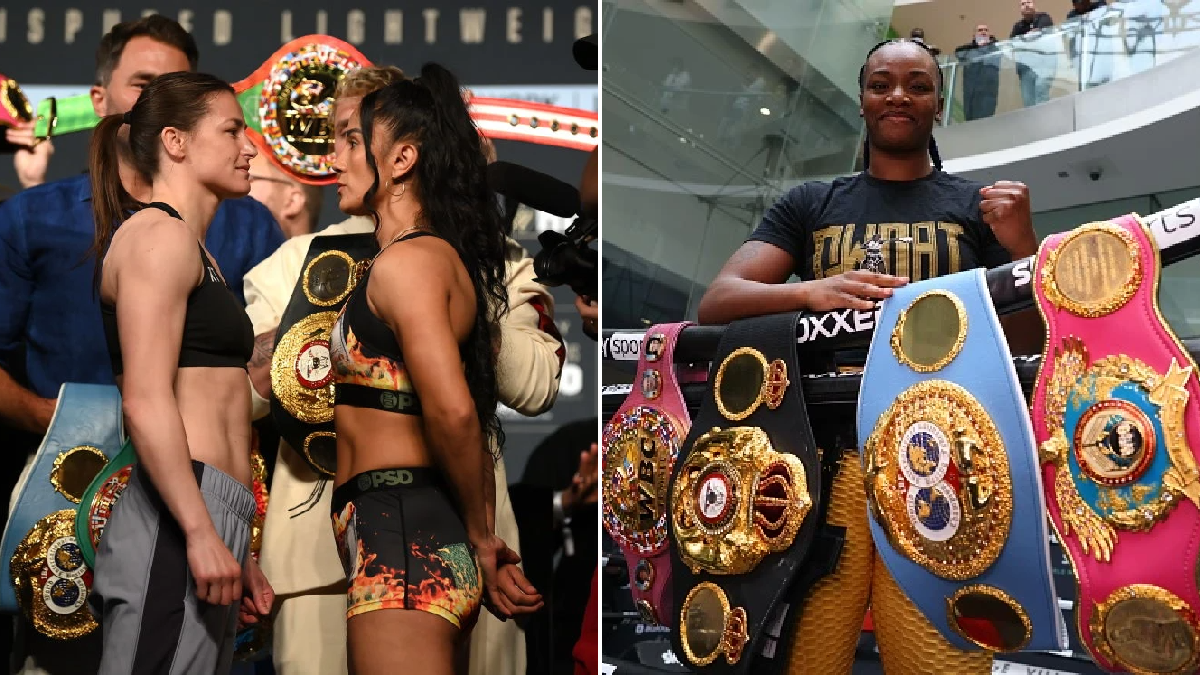 Claressa Shields will have a front row seat when Katie Taylor and Amanda Serrano change the sport of boxing tonight.

The 27-year-old, one of the most decorated names in the game, will be ringside at Madison Square Garden to watch history unfold as the undisputed lightweight queen Taylor puts her titles on the line against seven-weight world champion Serrano. With the legendary Madison Square Garden playing host, it is quite simply the biggest fight in the history of women’s boxing.

Shields is perhaps the one fighter out there who can dispute the claim that Taylor vs Serrano pits the no1 and no2 pound-for-pound best in women’s boxing against each other – with the American taking that second spot in the esteemed Ring Magazine rankings.

She has already carved her own legacy in the sport, winning two Olympic gold medals before becoming the quickest fighter in history to become champion in three different weight divisions, ruling two of them as undisputed. A fight on the same stratosphere as Saturday’s historic showdown in New York is also looming large for her this summer for all the middleweight gold against Savannah Marshall, her old foe from their amateur days who she is determined to silence.

For much of her amateur and professional career, Shields has been chasing down records of her own. On that journey, Taylor and Serrano have both served as inspirational figures in their own ways.

‘This fight is raising the bar for women’s boxing and women’s sport. I’m just happy I’m on the right side of history of being here in the sport at this time,’ Shields told Metro.co.uk in an exclusive interview.

‘I am a pioneer in the sport myself. But with Katie, she was part of the reason why I even attempted to go for that second Olympic gold medal. She won the world championships five times. I won it three times. So going to the Olympics twice was my way of trying to keep my records close to hers even though she had been boxing way longer than me. She was the inspiration in that way.

‘As for Serrano, she is a knockout artist. And who doesn’t love that, right? Right now, I am a three-weight world champion. She is a seven-weight world champion. I am looking up at her right now, I won’t be a seven-weight champion, maybe five. I will never be able to compete at 135lbs or 140lbs but I want to have my resume measure up to theirs even though I have fewer fights. So they have been a huge inspiration in that sense.’

For the first time in her career, Taylor enters a fight as the betting underdog. Major names in boxing are favouring the explosive power and tenacity of Serrano, the hometown fighter having been raised in Brooklyn a stone’s throw away from MSG.

But having honed her own unique style over an impeccable career that also includes close to 200 amateur fights, Shields has no doubts over Taylor’s ability to withstand the pressure Serrano can unleash.

‘It is all about the kind of opponent you fight. When you are talking about punching power you always have to look at the opponents they have fought,’ Shields said. ‘Amanda has fought some good fighters across those seven divisions but Katie is different with that amateur pedigree. It is really a style we haven’t really seen.

‘That is the foundation of boxing. Pro boxers don’t just turn pro. Even though Amanda has that punching power, I think Katie will put in a different boxing style to make sure that power isn’t such a threat.

‘Age can play a factor, another factor is that Katie has been in more wars. But that can also play in her favour. She been in these wars before, against Delfine Persoon twice, against Jessica McCaskill, girls who came and went for broke against her. And she had to figure out what to do to overcome that. Amanda’s punch power is great but she also has skills. She is such a tough fighter but I think we will see a different Katie from what we have seen. I think she will be super explosive.’

Tyson Fury stunned Wembley Stadium with a one-punch knockout against Dillian Whyte a week ago in a bout that became painfully one-sided from the opening bell.

Given the skill levels of both fighters in New York tonight, Shields sees nothing but a gruelling 10-round contest – but believes Serrano will have enough to take it and set up an equally titanic rematch.

‘I think it will be a split decision for either Serrano or Taylor. But I think Serrano can edge it if she is smart,’ Shields predicted.

‘As for a rematch, why not? If no one gets a knockout I believe that it will be warranted, given this is the biggest women’s boxing match ever.’

While Taylor and Serrano have taken centre stage, the ever-divisive Jake Paul has also played his role. With his Most Valuable Promotions standing behind the Puerto Rican and playing a key role in getting the fight over the line, the YouTuber-turned-boxer has been praised for his role in brokering one of the biggest fights of all-time.

Paul and Shields meanwhile have shared a bitter feud over the last 12 months, sparked when Paul offered the decorated champion a spot on the undercard of one of his fights – an offer she deemed nothing short of insulting.

Assessing Paul’s role in this fight, Shields insists focus must remain solely on the fighters – but appreciates what he has brought to the table in order to make it happen.

‘I have watched the girls, their interviews. I don’t pay too much attention to what Jake Paul is doing,’ she said. ‘I am happy he is supporting Amanda Serrano. If he hadn’t got into the picture, there would be no Katie Taylor vs Amanda Serrano.

‘She has wanted the fight for years, it was supposed to happen on more than occasion but it didn’t. Then she got with Jake Paul and all of a sudden, there was a turn for the best and now it’s happening. So he has played a part in that. But I’m a fan of the women, not a fan of Jake Paul.’