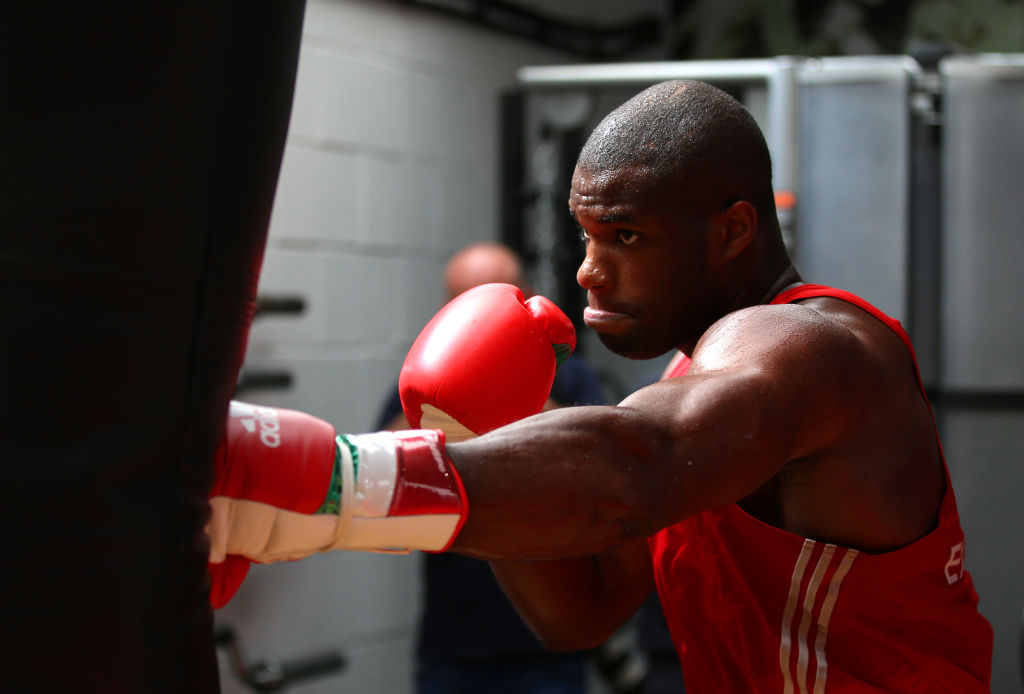 The plan fell apart that night. Dubois fought a large portion of the contest with his left eye completely closed – a result of Joyce’s sublime performance as he jabbed and countered with precision to break down the younger man.

With no defence, the end came in the 10th round when the 23-year-old dropped to his knee, unable to beat the count.

The gruesome swelling on the night told the whole story. Dubois had suffered extensive damage to his eye – medial and orbital floor fractures having also suffered retinal bleeding that left his career in the balance.

Seven months on, he is set to return to the ring against Bogdan Dinu on Saturday night for the interim WBA ‘regular’ title. That eye will be a clear and obvious target for the Romanian – and for anyone else Dubois shares a ring with for the remainder of his career.

While the loss to Joyce is now forgotten, Dubois will now seek to move on from the injury that has derailed other fighters before him.

‘I have had a lot of time to think and reflect on everything, how things were going and what I want to do next,’ Dubois told Metro.co.uk.

‘I’ve been able to stop, sit back and let the boxing carry on without me and have time to heal up.

‘The eye isn’t something I’m aware of. It’s fine now. I think it has healed perfectly and it is stronger than before. There won’t be any hesitation or reason to hold back in my next fight or whenever I step in the ring.

‘I think they [future opponents] will definitely target my eye and try use the tactics Joe did against me in my next fights. But I anticipate that, and I will be ready for that. It is up to me to deal with that.’

Dubois had stopped 14 of his 15 previous opponents heading into the Joyce fight with his aura of invincibility undeniably dented by the end of the night.

The reaction to how the fight ended ranged from understanding to ruthless – with former world champions David Haye and Carl Frampton among those to accuse the Londoner of quitting.

Similar injuries have taken their toll on other British fighters. Kell Brook struggled to reach the levels he once fought at after absorbing merciless punishment against Gennady Golovkin in 2016. Billy Joe Saunders’ future remains uncertain after the damage he took against Saul ‘Canelo’ Alvarez in May.

With boxing an unforgivingly proud sport, the debate over ‘quitting’ in the ring is unlikely to go away anytime soon. But Dubois insists his return will firmly dismiss any concerns over his own desire.

‘People are always going to have things to say but sometimes the situation cannot be helped.

‘It was what it was, some fighters had certain things to say, but everyone has their own opinion. I am out to show I am no quitter. If I was a quitter, I would have packed it in after that fight and gone into hiding. But I’m not. I am still 100 per cent still in this. And I still have work to do.’

There have been plenty of changes behind the scenes. In the aftermath of the Joyce defeat, Dubois parted ways with trainer Martin Bowers, linking up with Mark Tibbs earlier this year.

That partnership ended in May however with the heavyweight working with Shane McGuigan in the run up to his comeback fight, joining a talented crop of fighters at the Battersea gym that includes Luke Campbell and new WBO cruiserweight champion Lawrence Okolie.

While there are new faces, there has been no major rebuild for Dubois.

‘It has been about little improvements that I have to make,’ he continued. ‘Little things that will make the world of difference.

Victory over Dinu this weekend will set Dubois up for a meeting with ‘regular’ WBA champion Trevor Bryan. The winner of that contest will be mandatory for ‘super’ champion Anthony Joshua – a route which offers the Greenwich fighter a swift climb back to the top.

‘I want to establish myself in that world title picture as quickly as possible,’ Dubois said. ‘Climb back up there and be in good fights, domestically and internationally and see where we end up. I want to give this sport my best shot, come out with all my faculties intact and walk away with no regrets.

‘The Bogdan fight will definitely show that I’m still a force in this game.’

Joyce, the man who briefly derailed Dubois, is still to fight since that win last year with a summer meeting with Oleksandr Usyk now off – collateral damage from the collapse of Fury vs Joshua with the Ukrainian now in line to challenge for the latter’s world titles.

While the two appear to be on different paths for the time being, Dubois is adamant there is unfinished business with his fellow Londoner.

‘I think we need to get it on again as soon as possible. As soon as I’ve established myself again, I will be calling him out. I’ll be calling out whoever the right option is for me. And if that’s him, we will have a good dust-up in the future and settle this once and for all.’

‘BACK STRONGER: Dubois vs Dinu’ – This Saturday, live on BT Sport 1 HD