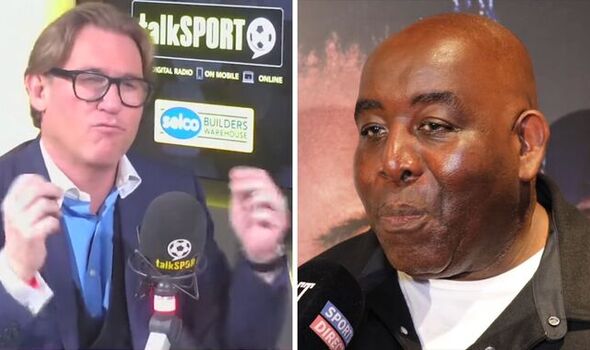 Jordan has been a heavy critic of AFTV over the last couple of years for their ‘low IQs opinions’ and was confronted by Lyle for his comments when the YouTube star was invited onto talkSPORT – whom Jordan works for as a pundit.

“He questioned the IQ of the fans that came on AFTV and I was like ‘The IQ, you’re working on a radio station like talkSPORT, as far as I know you don’t check the IQ of everybody that calls onto this station’… it was very hypocritical to me.

“The other thing that I found really below the belt was him saying that if he was in charge of Arsenal Fan TV, that he would shut us down. I would shut AFTV down. Are we not entitled to our opinion? Is this North Korea now? That we can’t have our say so that is why I went back at him.”

In response to Lyle’s rant, Jordan said: “It amazes me that there is a lot of criticism going on in your platform, yet you cry when someone criticises you.”

Wilder has Usyk concern because of Parker ahead of Helenius fight

Fury has three-fight plan that doesn’t include Joshua – EXCLUSIVE

Now, Lyle has reignited the feud with a playful comment during an interview on iFL TV alongside Oliver. “Can you punch him for us,” Lyle said to Oliver as he burst out into laughter.

“You’re not the first person to as me that. You know what, if I have done what everyone asked me to do to Simon this what I’d be doing,” said Oliver as he threw a combination of punches into the air.

Oliver (14-1) was forced to retire from professional boxing in 1998 after suffering life-threatening injuries in a bout against Sergey Devakov at the Royal Albert Hall in London. The Omen developed a blood clot on his brain from a shot received earlier in the fight and was very lucky to survive the ordeal.

He is now a well-respected boxing pundit and has had a stellar career after the incident.

The fighters we drop everything to see in the Octagon: The most watchable fighters, camps and more