Filip Hrgovic broke down Rydell Booker in the fifth round of their heavyweight fight in Florida on Saturday.

The dangerous Croatian became the first man to stop Booker, who had gone the distance with Kubrat Pulev and James Toney, in 30 fights.

Undefeated Hrgovic dropped Booker in the second round but remained poised rather than reckless. 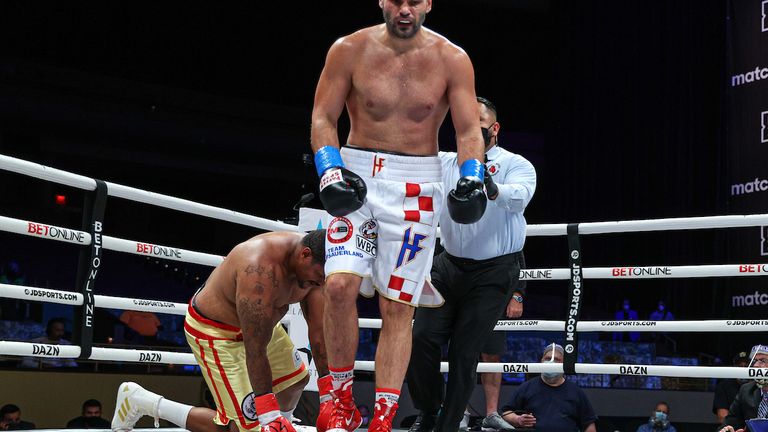 With Booker taking more and more punishment, the referee eventually saved him in the fifth when Hrgovic poured forward unloading punches.

Hrgovic has a perfect record after 12 rounds – this was his second stoppage win in two months.

He mentioned the names of Derek Chisora and Michael Hunter afterwards.

He was ranked at No 6 pre-fight by the IBF.

“The IBF is the route that has opened up for us,” his co-promoter Nisse Sauerland, who works alongside Eddie Hearn, told Sky Sports.

“To become mandatory is our aim.

“The WBC title will be tied up for quite a while.

“The IBF stick to their mandatories and they are very regularly. So, for us, it is the soonest route.

“The aim is to get a world title fight next year.”

Who is Kendall Hinton? Broncos’ likely Week 12 starting QB a converted practice-squad wide receiver
Recent Posts
This website uses cookies to improve your user experience and to provide you with advertisements that are relevant to your interests. By continuing to browse the site you are agreeing to our use of cookies.Ok