British heavyweight Tyson Fury has moved to 30-0 after a dominant display against American Deontay Wilder in Las Vegas.

The fight was stopped in the seventh round after Wilder's corner threw in the towel.  He had been dropped in the third and fifth rounds.  Fury stalked Wilder almost from the opening bell, using his jab to control the early rounds. 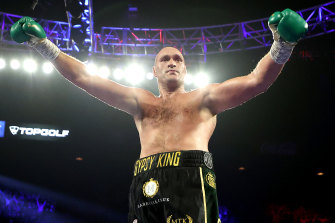 Tyson Fury celebrates after knocking down Deontay Wilder during their heavyweight championship bout in Las Vegas.Credit:Getty

When Wilder’s corner threw in the towel, be protested but referee Kenny Bayless waved the fight to a close.

The pair fought out a controversial draw in Los Angeles in late 2018 with many feeling Fury was the victim of a hometown decision.  The 34-year-old Wilder, who won a bronze medal at the 2008 Olympics, now moves to 42-1.

Fury's win sets up the possibility of a monster fight with compatriot Anthony Joshua, who regained his heavyweight belts in December following a shock loss to Andy Ruiz.