Is this the end for Paul Gallen? If he leaves the sport he will do so with his pockets lined but without the Australian heavyweight title around his waist.

Gallen suffered just his second defeat, to the unheralded Kris Terzievski, during a dramatic evening at the Newcastle Entertainment Centre. The Victorian young gun won a unanimous decision, all three judges scoring it in his favour 97-92. 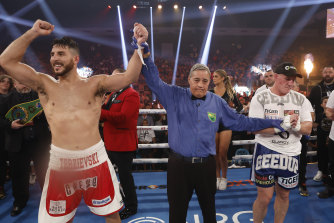 On a night in which Nikita Tszyu earned a brutal first-round stoppage and Harry Garside overcame the shock news that his mother was diagnosed with breast cancer, Terzievski notched the upset after dominating the cross-code star.

Gallen threatened to steal the victory during a thrilling ninth round. Seemingly out of the contest, he dug into his endless reserves to land a flurry of power shots on Terzievski. The “G-Train” couldn’t land one that could have changed the result and Terzievski hardly engaged in the 10th and final round, knowing he only had to survive to earn the decision.

As ever, Gallen was game but on this occasion outclassed. Terzievski’s reward is the Australian and Australasian heavyweight belts.

“That’s life, mate,” Gallen said afterwards. “Everyone gets old and whether I do it again, I’m not too sure. We’ll have to wait and see. Yeah, it could be it. We’ll see.”

Gallen has made a boxing career out of playing the villain. It’s a role that he embraced, having perfected it taunting opponents – particularly those north of the Tweed – during a decorated league career. Perhaps only Anthony Mundine has taken more money from fans who tuned in hoping to see him finish on his back.

And yet, midway through the first round, a chant of “Gallen! Gallen!” spread across the venue. At the very end, he has finally won them over. However, there was little for his new-found fans to cheer about until the final thrilling moments.

Gallen labelled Terzievski a “pretty boxer” and so it proved. The underdog used his superior reach to good effect in the early rounds, thwarting the former footballer’s attempts to trade from close range. Gallen kept coming forward looking for an opening that never came, walking into countless jabs.

Derided for not promoting the fight, Terzievski let his fists do the talking. He opened up a cut under Gallen’s left eye and targeted it and the former Cronulla captain’s body. Even after he was deducted a point in the seventh round – Terzievski was warned on numerous occasions for pushing and low blows – he built up a big enough buffer to ensure the result.

“I knew he was going to be good in the rounds before that. I tried to put the foot on the accelerator in five, six and seven and I just couldn’t, to be honest.

“It wasn’t until he got tired in round nine that I had him hurt, but I just couldn’t finish.”

Initially, Gallen was derided as just another footbrawler taking attention from more worthy local boxers. However the opposite is true. He gave up-and-comers a platform to showcase their skills and showed he has plenty of his own. This was just one challenge too far. 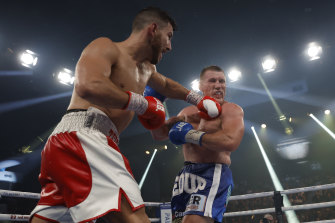 Gallen has now compiled a record of 13 wins and one draw, against Barry Hall. It was in his two losses, to Justis Huni and Terzievski, that he further elevated his reputation as a man who belonged in the ring.

What more is there to do? A rematch?

The megafight with Sonny Bill Williams has been talked about for almost a decade, but it remains just talk. Gallen has resigned himself to the fact it will never eventuate. Gallen has spoken about how, at the age of 40, it is getting increasingly difficult to put his body through the rigours of a fight preparation. Unless “SBW” finally accepts the challenge, the motivation to absorb punishment may not be there.

Tszyu knocked down Mason with a right uppercut midway through a lopsided first round. The underdog regained his feet, but will wish he didn’t. Moments later it was all over, the referee mercifully stopping the fight before further damage was inflicted.

“I didn’t expect him to come out guns blazing,” Tszyu told Main Event. “I took a couple of shots, let him get comfortable, and then took care of business.

“It’s the blood that gets to me, seeing that bloody nose – oh, the joy I felt from that.”

It was less a win than a statement. It was delivered in front of about 6000 spectators including older brother Tim, who will fly to the United States on Thursday morning to eyeball to Brian Castano and Jermell Charlo ahead of their super-welterweight clash for all of the belts. Father Kostya watched it all unfold on Facetime. All were suitably impressed.

While Tim is on the cusp of becoming a world champion, Nikita’s journey is only just beginning. His first professional fight, against Aaron Stahl, didn’t go past the second round. So quick was his demolition of Stahl, there was little opportunity to determine just how good he is.

This was quicker still. Against Mason, also a southpaw who had won his previous five fights, Tszyu got a chance to showcase his sheer power. There is a reason his moniker is “The Butcher”.

Yet afterwards, he gave himself a score of just 6.5 out of 10. When Tim was asked to provide his own rating, he said: “He knocked the guy out. Ten.” 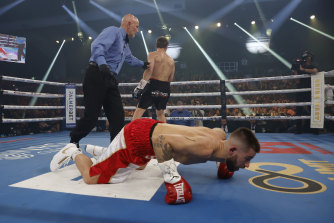 Nikita Tszyu wins his fight during the bout against Mason Smith.Credit:Getty Images

Tim was keen to lend his support, but gave an insight into why he wasn’t an overbearing presence in the lead up.

“I remember when I first started up it was all ‘Kostya Tszyu, Kostya Tszyu’ this and that. It was sort of doing my head in. Yeah, my dad was a superstar, but I’m just trying to do this, like every other boxer.

“All the comparisons – that Nikita should do this or be fighting on my card – let him go on his own journey. He doesn’t need to be following in the way I do things, we’re two completely different people, different personalities and style-wise as well.

“I’m proud of the way he’s handling things and the way he is doing it.

“He keeps saying nice things about me [to the media]. I say to him ‘Stop being so nice bro. Whenever somebody asks about me, tell them to bugger off. You’re the one who is fighting.’

“When the attention is on him, I stay away from him. When it’s his fight, I stay away because it’s his day, it’s his time to prove himself. It’s got nothing to do with me.”

Garside: ‘I knew I had to do it for her’

Harry Garside had to overcome the shock of learning his mother was diagnosed with breast cancer, as well as serious hand injuries, in defeating Layton McFerran in his third professional fight.

Garside earned a seventh-round technical knockout win at the Newcastle Entertainment Centre, but only afterwards did the setbacks he faced in doing so was revealed.

“Nine days ago my mum told me she got diagnosed with breast cancer,” Garside said.

“If it was going to happen to anyone in the family, I’m glad it happened to her. She’s the strongest one by far, she’ll be fine.

“I knew I had to do it for her. I knew she’d be watching, she couldn’t come. I knew she would be cheering from home… I’ve got the best parents in the world.”

Garside is expecting a stint on the sidelines after exacerbating hand injuries in the contest. Scans will determine the damage, but surgery is a likely outcome.

“The hands are pretty screwed, that’s for sure,” he said. “I wouldn’t back out of the opportunity to fight in Newcastle.

“I’m pretty sure it’s boxer’s knuckle in this one and I’m not too sure about this one.” 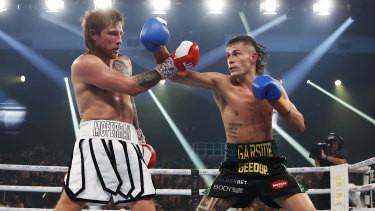 During the traditional pre-fight stare off when bravado levels are at their highest, Garside admitted to having doubts.

“We’re all fearful, we’re all scared,” he said on the eve of the bout.

Garside is still a long way from being the top dog in the lightweight division: that mantle belongs to fellow Australian George Kambosos. However, he is a man to be feared nonetheless.

Garside won every round, but it was in the sixth that he took full control. He hit McFerran’s body and head at will, but the Tasmanian showed incredible courage to make the bell. It was more of the same when hostilities resumed and the referee mercifully called it off.

Garside showed the speed and precision that enabled him to become the first Australian Olympic medallist since Grahame “Spike” Cheney in the 1988 Games. In this clash of the mullets he also displayed the power that will be required to successfully transition from the amateur to the professional ranks. Garside punches hurt as well as score.

The lightweight division is perhaps the most exciting in world boxing. Kambosos currently rules it. “Ferocious” is attempting to become just the seventh undisputed world champion across all weight divisions since the four-belt era began in 2004 when he takes on American Devin Haney at Melbourne’s Marvel Stadium on June 5. If successful, he will add Haney’s WBC crown to the WBO, WBA, WBC franchise, IBF and Lineal Ring Magazine belts in his keeping.

Garside wants to eventually take possession of them. He is only at the start of his journey as a professional and there is a long way to go. But given he is only 24 and has the legendary Johnny Lewis in his corner, the upside for Garside is immense.

However, it is now time to heal, in more ways than one.