Kostya Tszyu has been to only one of his son’s fights: the first one. And even if he fights for a world title, Tim doesn’t want him to add to the tally. 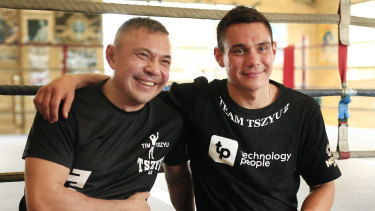 Kostya Tszyu and son Tim in Sydney in 2019.Credit:Getty

“He won’t be having front-row tickets, that’s for sure,” Tim said. “That’s the thing, I’ve done things my own way.

“For me, I love the support, and my dad is always supportive. He hasn’t been there and I have done it all myself. I’m used to doing things the way I want to do it.

Given Tszyu snr lives in Russia, face-to-face meetings with Tim are few and far between. However, the pair remain close and speak regularly on the phone. Tim believes he already has the necessary support system around him despite the absence of his father.

“If I didn’t have these people around me, my dad would have come back, for sure,” he said.

“He knows that everything is going all right, that we’re doing good things and that the right people are looking after me, so he’s got nothing to worry about.”

The last time father and son saw each other in Australia was in September 2019. The pair worked out together at the family’s Rockdale gym, although Tszyu snr returned to Russia before Tim’s fight against Jack Brubaker later that year.

Speaking to the Herald at the time, Kostya said Tim was making his own way in the sport.

“No one should compare Tim to me,” Kostya said. “Tim is Tim, Tim Tszyu.”

The Tszyus have a large following in Newcastle and there are hopes the Hogan fight will be a sellout. Kostya was undefeated in seven fights in the city, while Tim will put his own undefeated record on the line there on Wednesday.