Home » Fighting » Kambosos throws Haney’s gift to canvas, but can he floor the man?

Devin Haney gave his father one job before they arrived at Rod Laver Arena for a face-off with George Kambosos jnr: to find a gift for the man trying to take his undisputed lightweight crown.

Bill Haney found just what he was looking for. Seated behind the four world titles his son will defend against Kambosos in Melbourne on Sunday, he held up a book that left a quarter of the room in hysterics.

“It’s the Art of War. You can hand it to him over there because we want him to be well prepared,” Bill Haney said. “What excuse is he going to have on the 16th?”

Kambosos had quoted Sun Tzu’s Art of War when he missed weight on his first attempt in the build-up to his bout with Haney four months ago, before losing his belts in convincing fashion. This time around he had little time for theatrics, throwing the book to the floor when it was passed to him during Friday’s press conference.

“They want to try to give me a present there, thank you but I don’t need that, I’ve got mine,” Kambosos said.

“There’s no excuses. Whatever they’re saying, that’s no problem. Whatever they’ve done in their preparation, whatever is on their mind, that’s OK. Everything is perfect on our side. I’m looking forward to a great fight. If they want to talk, they want to say things, beautiful. 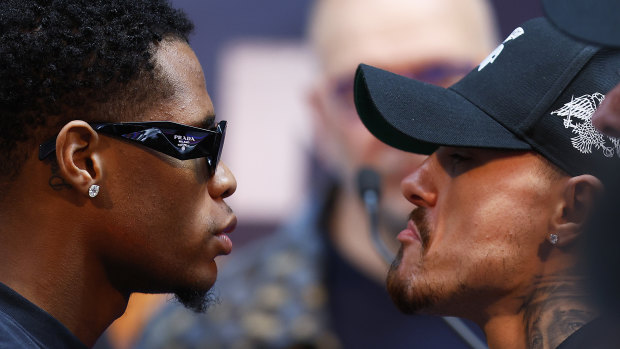 “The changes have been made. You learn from your losses and come back a better fighter. I’ve learnt from my losses. I’ve gone back to my roots as well. We’re just focused. I’m not going to give anything away. Sunday is when I do my talking. We’ll see who laughs last.”

Kambosos [20-1] will target a trilogy bout with the undefeated Haney [28-0] if he can win the WBC, WBO, IBF and WBA Super championships this weekend.

But the 29-year-old will need a dramatic turnaround if he is to become the ninth undisputed champion in boxing’s four-belt era after being comprehensively beaten in their first meeting.

Kambosos parted ways with trainer Javiel Centeno in favour of former mentor Chris Bakis, a move that inspired Haney to fire two questions at his rival during the press conference.

“I’ve got a question for George. Why did you fire coach Javiel? What about [manager] Peter Kahn?”

The answer to both was the same: “That’s none of your damn business”.

Kambosos has been somewhat circumspect in the build-up to this fight, in stark contrast to their last bout. Haney, on the other hand, is refusing to mince his words.

“Ain’t nothing to be whispering. All my words are out, I’ll speak it for the world to hear,” Haney said.

“They’ve been quiet but every time they open their mouth it’s a different excuse. They talk this quiet stuff but they keep making up excuses. Now it’s the coach, then it was the referee because I was holding – every excuse in the book.

Watch the Sonny Bill Williams v Mark Hunt fight live & exclusive on Stan Event event on Saturday 5 November. New customers can sign up to a Stan free trial and can purchase SBW v Hunt on Stan Event for $50 at stan.com.au/event.