Adam Lopez says Michael Conlan turned down a potential clash, but hopes victory over Isaac Dogboe will increase demand for a showdown with the Irish star.

Lopez was initially told that he could earn a clash with Conlan, but insists the world amateur gold medallist turned him down as a potential opponent.

“Before we signed this fight, [promotional team] Top Rank said: ‘The winner gets to fight Conlan,'” Lopez told Sky Sports.

“We started putting in the contract, we get Conlan after this, and they went to Conlan to see if he would be open to that and he turned it down.

“It’s kind of disappointing. A young fighter like himself, like myself. That’s what boxing needs, the young fighters to step up to the plate and take on those big fights, the risky fights.

“I’m going to say his name as much as I can and hopefully it wakes him up, it brings him to the table and the time to take the fight.

“That’s the fight I wanted after this fight. If he doesn’t want it, then I can’t force him, unless I get a world title or something. Let’s keep working for that title, and hopefully one day when I do get that title, he will step up and fight.

“Maybe it’s a higher risk and my name is not big enough, or whatever the case is. But I know one thing, if I get to that world title, there is no reason for them to turn it down.”

Lopez, who has risen the rankings with 15 victories, was edged out by current world champion Stephen Fulton on a majority decision and floored Oscar Valdez during a disputed stoppage loss.

“I took the [Valdez] fight on a day’s notice. It showed that I could hang in there with the best of the best,” said Lopez.

“Oscar Valdez is one of the best fighters in the world and I showed my skills. Everyone doubted me in that fight. They thought Oscar was going to walk right through me. I dropped him in the second round. I thought I dominated the fight. He did hurt me in the last round, but not enough to where I think the ref should have stopped it.

“It definitely put me on the map. People know who I am and what I can do.

“I’m right there. My first loss was against Stephen Fulton. That was before I really knew the boxing business. I was taking any fight in my way and I just threw myself in with whoever. Now I’ve learned the business. I’m with Top Rank and they’ve got my back.” 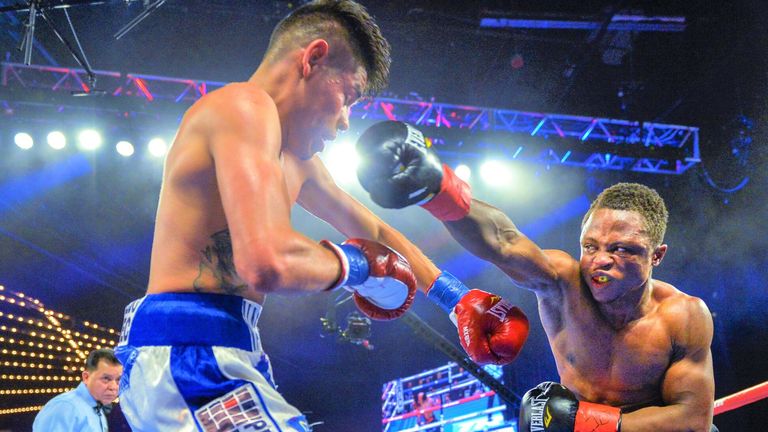 Dogboe returned with a stoppage win over Chris Avalos last summer, but Lopez believes the Ghanaian could wilt in another punishing battle following his back-to-back losses to Emmanuel Navarette.

“His last fight against Chris Avalos was pretty easy. Avalos is kind of done, he’s out the door, so it wasn’t really a test. It was an eight-round fight. He stopped him in the eighth round and obviously he’s not a big threat.

“I feel like I’m definitely going to see what he’s got early on. I’ll test him, I’m going to see how his chin reacts to taking some real punches, then we’ll find out. We’re going to see if he folds or if he’s still got something left in the gas tank.”

Watch Lopez vs Dogboe on the Inoue vs Dasmarinas bill, live on Sky Sports, on Sunday at 3am.