‘I’ve died twice, so you don’t only live once… That’s a lie!’: The remarkable story of boxer Cheavon Clarke who flatlined in hospital TWO times and is now targeting Olympic gold in Tokyo

To start the remarkable story of Cheavon Clarke’s life, we must first talk about his death. Or deaths. For by rights, the British boxer should not even be with us, let alone going for gold at the Olympics.

At the age of eight, Clarke was left lifeless after falling off a ladder and being impaled by a steel spike. Then when he was 18, he ‘flatlined’ in hospital again, this time because of a burst appendix.

Clarke, though, has so many tales to tell that he does not even mention ‘dying’ twice until half an hour into our chat. Indeed, a question about his journey from Jamaica elicits a 15-minute monologue, which includes his account of how he first knew he could fight when he punched a racist bully at school and got excluded. 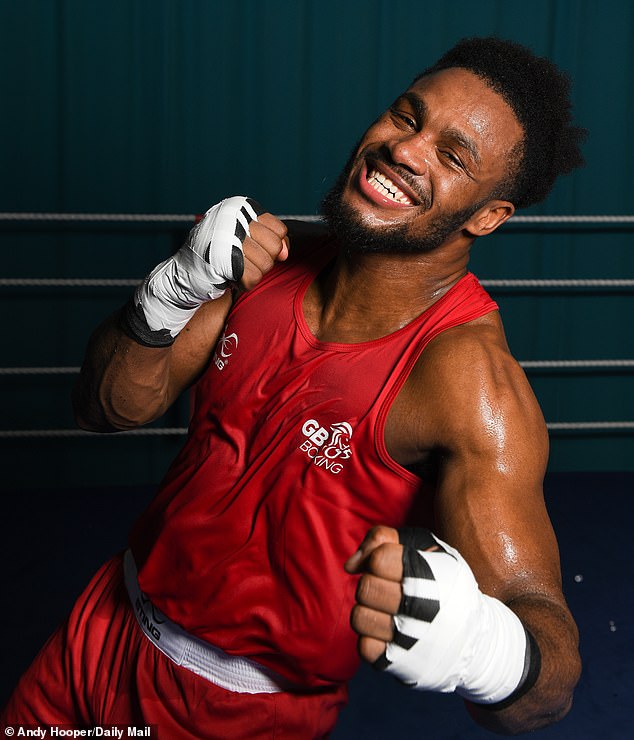 Cheavon Clarke is eyeing up a gold medal at this year’s Olympic Games in Tokyo, Japan

The heavyweight, now 29, also recalls the moment he squared up to Prince Charles, the time he played Call of Duty with Usain Bolt, and when he went in the ring with Rio Ferdinand in the former footballer’s back garden. Oh, and how he once quit boxing to become a lorry driver.

AS we are here because of Clarke’s boxing, let’s journey back again to that first punch.

Having grown up in the small town of Stonehenge, near Montego Bay in Jamaica, he moved to England with his mum and sister at the age of 10 and started school in Kent.

‘I was the only black kid in school but I didn’t know what racism was,’ admits Clarke. By secondary school, however, he understood. 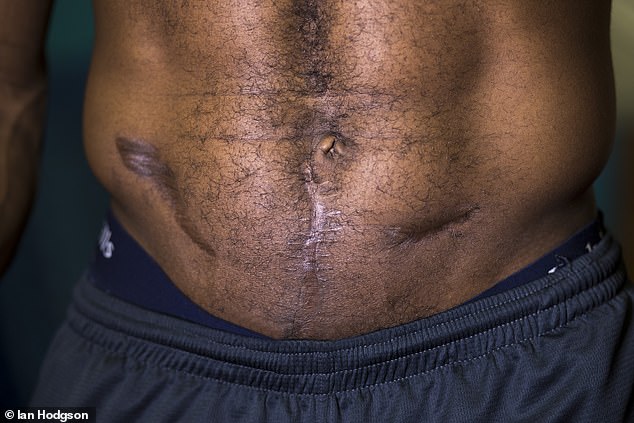 ‘One day I just batted this kid. We had a fight because he was racist to me and I dealt with it. I got excluded for one day but it was warranted. I wasn’t a mischievous kid at school but if somebody started on me, I’d always finish it.

‘My mum told me, ‘I send you to school to learn so if you get in trouble, when you come back home, you will be in more trouble. But if somebody bothers you, you can deal with it however you want to deal with it and I will back you with my life’.’

Following his playground scrap, Clarke plucked up the courage to go to the boxing club that his school bus used to drive past each day. ‘I thought it would be really cool to box,’ he recalls.

‘I had my first session, it was really good and I met a coach called Jason Weeks and he was really into me. He said, ‘You can be really good, you could be a world champ’.’

Weeks had an eye for talent all right and Clarke quickly rose through the ranks. But after he failed to win selection at British trials, another coach suggested he try out for Jamaica, who he represented at the 2014 Commonwealth Games in Glasgow.

It was there that Clarke met Prince Charles and he laughs when Sportsmail shows a photo of him appearing to give the old one-two to the heir to the throne. ‘Prince Charles, you don’t want no smoke (trouble) man,’ quips Clarke, his Jamaican slang coming through. 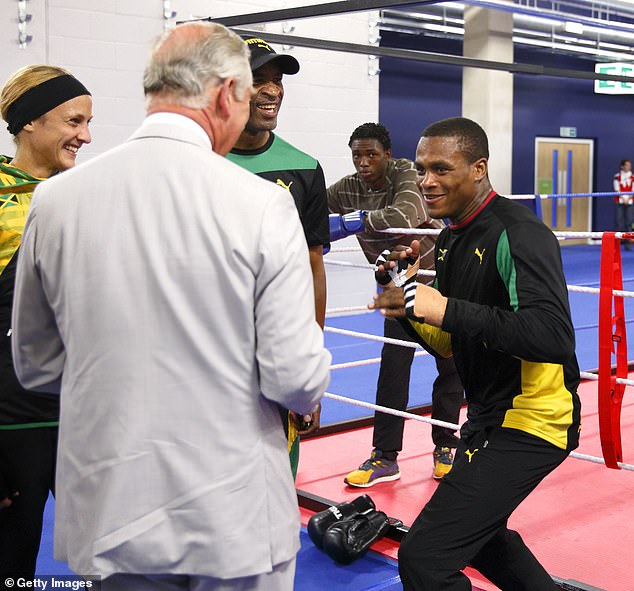 ‘Prince Charles went to shake my hand and I went…’ Clarke raises his fists and mimics the pose on the picture. ‘He did it back and we shook hands. I was like, ‘Listen, I’m a bad man. If I hit you once, you don’t want to feel it a second time’. He was laughing his head off.’

As well as the Prince of Wales, Clarke also met Jamaican royalty at those Commonwealth Games in the form of sprint king Bolt.

‘We were on the same corridor,’ he says. ‘Literally walk out of my room and I could walk into his. It was pretty dope. He invited me in to play Call of Duty. Just kicking it. Cool guy, man.’ The fun in Glasgow stopped, though, when Clarke got in the ring. He adds: ‘I lost my first fight and it was terrible. It was on international TV, probably the third most viewed programme in the world at the time. I went home and I was just depressed. I was like, ‘I’m not boxing no more’. I took a break and started driving a lorry. 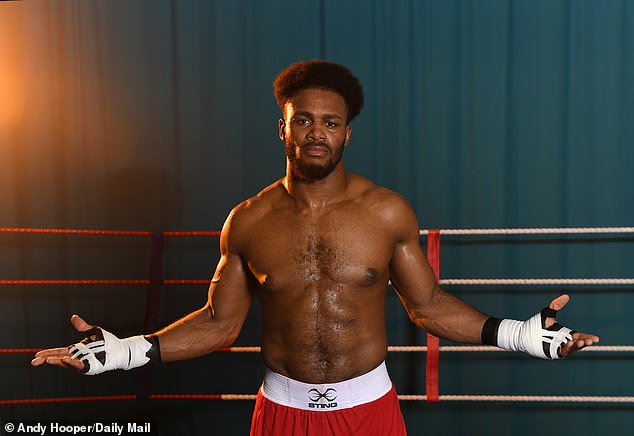 ‘My old man owned a company and we got subcontracted work that delivered to B&Q and Homebase. I went around the country. It was brilliant. I loved it.

‘For the first time, I started making some money. I started to feel good. I was getting paid decent. I was my own boss. I could pull up and sleep when I wanted. My friends were in my ear all the time, “You’re wasting your talent”. I was like, “Guys, I’m making a bit of money, leave me alone”.

Clarke went on to win the National Amateur Championships in 2016 and got another trial for Team GB. This time he was successful and in January 2017 he was invited on to the funded World Class Programme. He left his lorry. It was also around this time that he boxed with former England captain Ferdinand. ‘He came up here to train and I sparred with him. I used to go to his house and he had a ring in his back garden. He was actually decent. I’m not even trying to blow smoke. 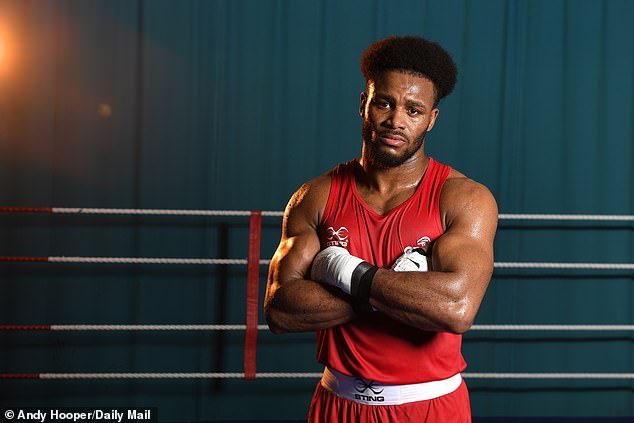 ‘He’s a nice guy. To this day, if I call him he will answer and pick up and just be cool.’

World heavyweight champion Anthony Joshua, the London 2012 gold medallist, is another famous face Clarke has come across in Sheffield. ‘Same as Rio, if I want to chat to Josh about something, I will call him and he will pick up and answer. I don’t get flustered by meeting people. I don’t see them as no different to myself.’

‘I’ve died twice, so you don’t only live once, that’s a lie.’ We have reached the tale that trumps the lot. It dates back to when Clarke was a child in Jamaica, but for obvious reasons it is ingrained on his mind.

‘I was playing hide and seek and there was a building site. They were making the steps for the upstairs of a house and there was a wooden ladder. I thought that if I went on the roof and kicked away the ladder, nobody would be able to find me. 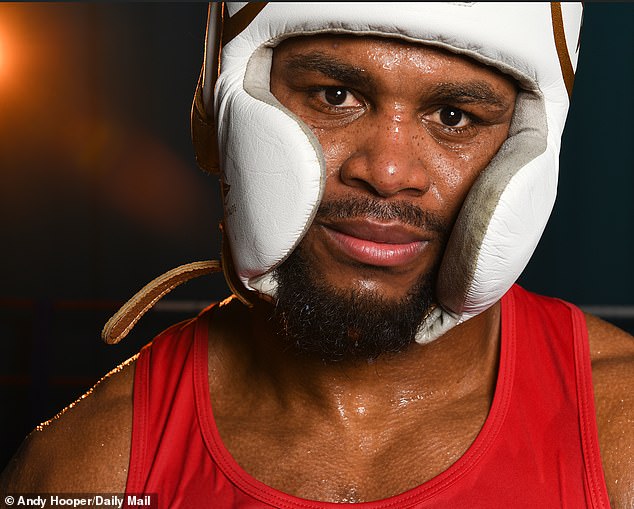 Clarke came across a number of famous faces in Sheffield, including Anthony Joshua

‘I was running up the ladder and I must have got three quarters of the way up when the ladder went and I dropped. In Jamaica, there are steel spikes in the middle of the blocks they use to build houses. And I landed on this spike. It went straight through me.

‘I was trying to get off it and must have screamed. I remember people carrying me and my legs weren’t moving, I was just being dragged with a streak of blood following me.

‘They put me in a car and drove me to hospital. I remember waking up and my mum was there and I had a colostomy bag. I was told I died on the theatre table. I flatlined.’

This being Clarke, though, it is only half of the story. A decade on, when he was living in England, he felt a pain in his stomach one Friday night after work.

He tried Gaviscon and then a Jamaican remedy, ginger tea, but neither helped and a friend persuaded him to go to A&E. But there was a five-hour wait so Clarke decided to go back home, where he ended up collapsing on the stairs and was rushed back to hospital in an ambulance.

‘I remember them pushing me on a wheelchair. I was sitting there for a little while they gave me some tablets, and I was like, ‘Please save my life’. I was crying my eyes out. I woke up in the morning and saw flowers around me. My mum and my stepdad were there.

‘The doctor came up to me and said, ‘Mr Clarke, we had to do everything we could to save your life’. Long story short, I flatlined again. Mad, innit? Crazy life.

‘Some people say that shows I’ve got something special. But it just is what it is to me.’

However much he brushes it off, given everything Clarke has come back from, if he were to win a medal in Tokyo it would undoubtedly be one of the best British stories of the Olympics.

First he has to qualify for the Games. He will do so if he reaches the semi-finals in his 91kg weight category at next month’s European qualifying event at the Copper Box in London. If Clarke fails, he will have one final chance in May’s world qualifiers in Paris.

‘My definition of pressure is not having food, not having somewhere to sleep, so this is enjoyable,’ he says.

Clarke won a bronze medal for England at the 2018 Commonwealth Games and reached the quarter-finals of last year’s World Championships in Russia, where he lost to home fighter and eventual winner, Muslim Gadzhimagomedov. He is not ranked among the three favourites for Tokyo, but do not expect him to pay any attention to that.

‘I see my medal chances as top two and I’m not two,’ Clarke adds. ‘Nobody wants a silver or bronze. You just feel disgusted with yourself because you only want gold. For me to win a gold, it would change my life and my family’s life. It would inspire my neighbourhood and a whole new generation of young boxers.

‘It’s a cliche but I came from a little spot in Jamaica which people didn’t even know existed, to being here, so anything is possible.’

More than anyone, Clarke is living proof of that.