Tim Tszyu was cool, calculated and clinical in his disposal of Jeff Horn — and it appears the new face of Aussie boxing is approaching his career in the same way.

The 25-year-old launched himself on the world stage on Wednesday night by outclassing a former world titleholder in just his 16th fight.

Despite talk of targeting the WBO junior middleweight strap held by Brazilian Patrick Teixeira, Tszyu was keeping his feet firmly on the ground a day after demolishing Horn.

“Of course a world title isn’t going to be next,” Tsyzu said. “(But in) six months, two years, who knows? I want to get to the top, (but I know) there’s a long road ahead. There are plenty of tough fights ahead.”

Tszyu’s father Kostya fought for a world title in his 14th fight at the age of 25 but had a far more extensive amateur career.

The son shares the same manager as his father and he too is taking a steady approach to Tszyu’s next step.

“I’m a realist, having gone to the highest mountains with Kostya,” Tszyu’s manager Glen Jennings said. “Tim is very early in his career, he knows that. It was a wonderful achievement but we have so much more to do.” 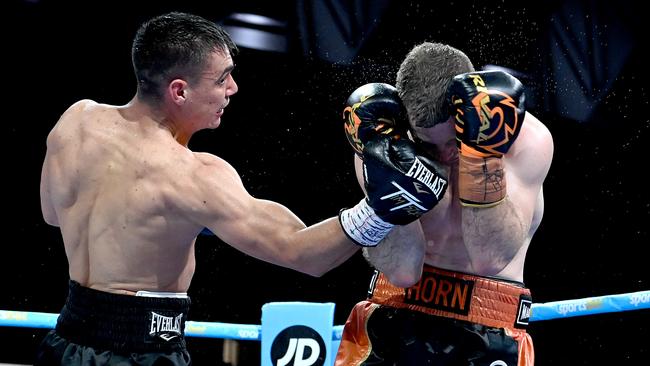 Tszyu loved his time in Townsville where his father responded to the first shock defeat of his career by stopping Ismael Chaves in 1997.

Queensland’s ability to host sporting events puts it in prime position for Tszyu’s next bout, whether it’s against another Australian or an international opponent.

“We could bring international fights over here,” Tszyu said. “Queensland is the only state to hold an event such as this, no-one in the world can do that. If we can bring a big fight to Townsville, hopefully Townsville is down for part two. Whoever they put in front of me, I think Queensland is where it’s going to be for now.”

“We may fight again this year if the opportunity arises,” Jennings said.

But Team Tszyu is also working on bigger things, including the prospect of fighting in Russia, where Kostya lives today.

“We have been working on something in the background but we have to look at the current pandemic that exists,” Tszyu’s promoter Matt Rose said.

“It (Wednesday’s fight) went crazy in Russia, they love him there and Timmy is ready for the world but we have to get past this pandemic and then show the world who Timmy Tszyu is.” But for now he can enjoy a well-earned rest after an accomplishment that should be savoured.

“It feels good, of course after a hard-earned victory, fighting a great opponent in Jeff, it feels satisfying. But it’s not finished,” Tszyu said.

“I knew with the type of training I did I knew I was going to ready for this fight. I felt in control the whole fight, I felt I could walk through his punches, he was awkward, something I had to adapt to. But I proved to everyone and myself I’m able to deal with different styles.