Home » Fighting » Tszyu keeps on winning, but the real action happens outside the ring

In disposing of his most accomplished opponent yet, Tim Tszyu showcased his strength and an ability to adapt to challenges as they arise.

Those are the same traits his handlers will also need to display as they navigate their way through the murky world of global boxing politics en route to a world title.

While he didn’t land the knockout blow, it was a strong statement to the boxing world, most notably to World Boxing Organisation champion Brian Castano. Tszyu is mandated to fight for Castano’s world title, but the Argentine may instead opt for a rematch against WBA, WBC and IBF champion Jermell Charlo.

The champions won’t be able to hide from Tszyu for much longer, but could choose to delay his challenge given the obvious threat he poses.

“The only murky waters here is the rematch,” said Tszyu’s manager, Glen Jennings. 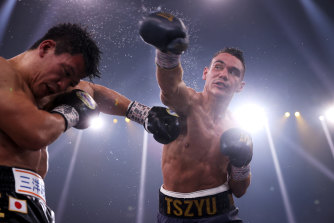 “Let’s be honest, if those boys sat and watched what Tim did over 12 rounds like that, they probably think it’s an easier option to rematch than take the mandates.”

What happens next is difficult to predict. The IBF has ordered Charlo to defend his belt against mandatory challenger Bakhram Murtazaliev. Should that transpire, Castano won’t have the option of dodging Tszyu. However, there are no guarantees that’s how it will play out.

“But we’re really hopeful and excited by the prospect that it may well be Brian Castano for the world title next,” Jennings said.

“And it’s just really a matter of time now. It could be any day that we get a decision and right now, the team – [trainer] Igor [Goloubev] and all of us – feel that Tim’s ready for that.” 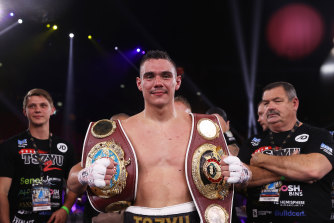 Tim Tszyu was too classy for Takeshi Inoue.Credit:Getty

For the first time in his career, Tszyu was pushed to 12 rounds. Inoue was the stern test the Australian needed: a world-class opponent, one who had himself challenged for a world title and had never been stopped. It was just the challenge Tszyu required as he prepares to fight for title belts.

“I kept on hitting him and he wouldn’t go down,” Tszyu said.

“This guy was squealing staying up.”

Whether it’s for a world title or not, the plan is for Tszyu to fight again in February or March. His promoters, No Limit, again staged a successful event, drawing more than 10,000 fans to Homebush Bay. Given Tszyu’s growing popularity, there will be no issues staging another sellout show locally if there is a ‘gap’ bout before challenging for a world title.

If, however, his next fight is against a major scalp, the Tszyu show will almost certainly head abroad.

“Castano is digging his heels in, he doesn’t want to come to Australia, he wants it in America,” Jennings said.

“Let’s see. It will either be Castano or someone else. We’d love to do another one here, we’d also love to do one in Las Vegas. We’ll see.”

Vegas was the location of some of the most memorable wins of Tszyu’s famous father, multiple world champion Kostya. Almost 20 years ago to the day, Kostya knocked out Zab Judah in the second round at the MGM Grand.

“The boys want [the next fight] here, but I wouldn’t mind going over there,” Tim Tszyu said.

“It’s always been a dream of mine as a young kid growing up, watching boxing on the big screen, to go to the States.

“I think it [the fight] should be taken in the States and then brought back here, the right way.”