London: Welcome home, Gypsy King. Tyson Fury’s first fight on British soil in four years – and maybe his last ever – has ended with a stunning knockout win over Dillian Whyte in front of a heaving Wembley Stadium in London.

On one of the biggest nights in the history of British boxing, Fury mounted a successful defence of his WBC, The Ring and lineal heavyweight titles and kept his unbeaten record intact with a crushing sixth-round stoppage victory.

Fury had claimed every round with relative ease until he produced a whopping right uppercut, set up by a textbook double jab, which sent Whyte tumbling to the canvas. Referee Mark Lyson immediately stepped in and called it off.

Afterwards, Fury grabbed the microphone and, as he tends to do after his wins, led the 94,000-strong crowd with a scratchy yet no less enthralling singalong of Don McLean’s classic American Pie – one of the songs that preceded his extravagant walk to the ring.

“There is no disgrace. It’s a tough game, man. He’s as strong as a bull and he’s got a heart of a lion. But you’re not messing with a mediocre heavyweight, you’re messing with the best man on the planet and you saw that tonight. 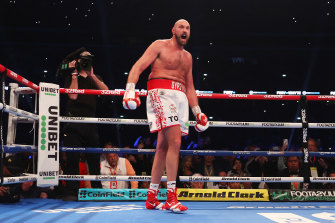 According to CompuBox, Fury landed 76 of his 243 punches to Whyte’s 29 from 171. The one that decided it was Fury’s 100th power punch thrown and 47th that met its target.

Fury had not fought in his home country since his remarkable comeback from mental health issues, drug and alcohol addictions, which derailed his initial reign as undisputed champion and drove him to the brink of suicide. Now an inspiration to millions in the United Kingdom, and indeed around the world, this occasion was designed to be his homecoming and fortunately for the almost entirely pro-Fury crowd, it went to script.

This was his 32nd win from 33 fights, and that winning punch will go down as yet another signature moment to sit next to his upset win over Wladimir Klitschko in 2015 and his thrilling trilogy with Deontay Wilder.

The bout turned into an ill-tempered affair with both fighters throwing shots on the break and a cut opening up over Whyte’s right eye after a clash of heads.

Fury, who said before the bout that it would be his last, brought the fight to a stunning close with a blistering right uppercut out of nowhere to send Whyte crashing to the canvas, and though he got back to his feet, referee Mark Lyson waved the fight off.

Wilder has removed 'snakes' from his camp ahead of Fury trilogy