Michael Chandler is laser-focused and confident ahead of the biggest fight of his mixed martial arts career.

In only his second fight in the UFC, Chandler will take on Brazilian contender Charles Oliveira for the vacant undisputed UFC lightweight title at UFC 262 in Houston, Texas on Saturday night.

Ahead of the bout, Chandler, a three-time former Bellator lightweight champion, laid out the test that stands in front of him, then explained how he would go about breaking down the man with the longest active winning streak in the division, and the most submission finishes in UFC history.

“I think Charles is probably the most dangerous guy, in the grappling department, that I have faced,” he told reporters during the UFC 262 pre-fight press conference.

“However, I have faced some very high-level competition when it comes to black belts.

“My style is more pressure, position and damage.

JUST IN:
UFC 262: Charles Oliveira ready to ‘go to war’ with Michael Chandler 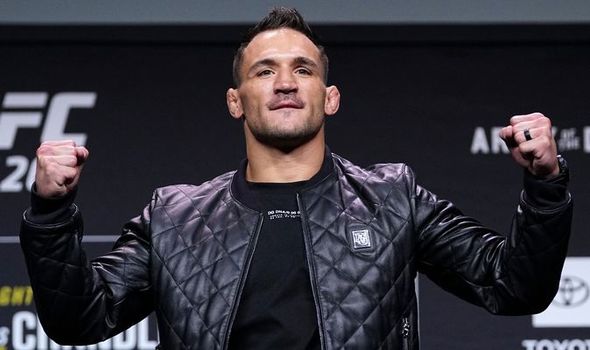 “My wrestling, even the way I wrestled in college, transitioning into mixed martial arts, it’s more of an anti-jiu-jitsu than it is an actual wrestling offence.

“I’m going to get my hand raised on Saturday night.”

Chandler may be relatively new to the UFC, but he’s no newbie. The 34-year-old has a career record of 22 wins, 5 losses, and has finished 17 of those victories inside the distance.

After winning Bellator’s 155-pound title on three separate occasions, Chandler joined the UFC, and demolished Kiwi contender Dan Hooker in just half a round at UFC 257 to announce his arrival as a serious threat to the title.

After his win, Chandler gave a stirring post-fight interview as he called for a fight with then-champion Khabib Nurmagomedov.

Khabib’s confirmed retirement meant that matchup never came to fruition, but Chandler had done enough to earn a shot at the newly-vacated belt.

It’s a turn of events that Chandler said feels very natural to him as he prepares for fight night in Houston.

“It feels like this is the way is was supposed to be scripted the entire time,” he admitted.

“A lot of ups, a couple of downs, but every road led me here and, honestly, as soon as I made the decision, as soon as that door just cracked open a little bit I said I was gonna come in (and) I was gonna kick the door down and showcase my skills and prove what I have been saying over the last decade.

“That I believe I am the best lightweight on the planet, and on Saturday night I get to prove that.”

And while the casual fans may still not appreciate his full capabilities as a fighter, Chandler is happy that he has the skills, and the experience, to step into the octagon on Saturday night and walk out as the UFC’s new undisputed lightweight champ.

“My resume speaks for itself. I have dismantled two former UFC champions, so I love my resume, I love my past, I love my ups and I love my downs.

“Not to mention the fact that I came in right away, kicked down the door, said ‘yes’ to every opportunity, showed up with my work boots on, just as my dad did as a union carpenter for the last 40 years.

McGregor and Khabib reignite war of words with Twitter battle