Despite being sick and tired of talking about the YouTube star – who has repeatedly called out the UFC boss over fighter pay – White couldn’t help but commend his rival for taking a ‘real fight’.

“I don’t give a s*** what they do, you know what I mean? But if he’s really fighting Anderson Silva, if that’s true, it’s about time,” White said at a press conference on Tuesday. “He’s got a real fight on his hands there, regardless of how old Anderson is. Yeah, that’s a real fight.”

When asked whether he would like to be involved in promoting the bout if it were to come to fruition, the 53-year-old replied: “Come on, are you serious? No, I’m not tempted to do anything. Stop asking me about Jake Paul, you guys. I don’t give a s*** what Jake Paul does. I know you love this s***, and I know it gives you clicks, but come on. 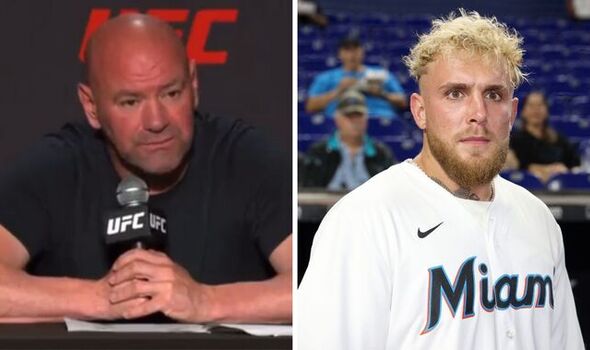 “Come on, the guy has nothing to do with my business. He doesn’t fight for me, he’s not even in the same f***ing sport as me. I don’t want to talk about him anymore. I don’t care.”

Paul is currently 5-0 as a professional boxer and has been through an ordeal in pursuit of his sixth professional bout. The Problem Child was initially set to face Tommy Fury on August 6, but the fight was cancelled one month prior due to TNT being denied entry to the United States.

In his place, Hasim Rahman Jr was brought in to save the show, but the son of a legend was unable to make the original 200lb limit and then the renewed weight of 205lb, leading to the entire event being cancelled.

His new opponent, Silva, is a former UFC middleweight world champion who also has professional boxing experience. As a boxer, he is 3-1 with recent victories over fellow MMA legend Tito Ortiz and former boxing world champion Julio Cesar Chavez Jr.

At 47 years old Silva is past his best but is still capable of producing glimpses of his former self and serves as Paul’s toughest test to date.

Tyson Fury vs. Deontay Wilder 3 PPV price: How much does it cost to watch 2021 trilogy fight?

Gregor Gillespie rages at Tony Ferguson 'rejecting' fight with him