The Miz won the WWE Championship at Elimination Chamber

The Miz stunned Drew McIntyre by cashing in his Money in the Bank briefcase at Elimination Chamber to win the WWE title on Sunday.

McIntyre had just outlasted six challengers in a punishing Chamber match, but suffered the ultimate sucker punch at the hands of Miz, who charged to ringside to pick up the scraps. He swiftly dispatched of the Scot to win his second WWE Championship – over a decade after winning the first.

A huge caveat to the story, however, was the role Bobby Lashley played in the affair, delivering a beat-down of McIntyre after the Chamber match to leave him prone for Miz. This presumably sets up a rivalry between the former two, with Miz little more than a transitional champion to help them on their way – albeit a deserving one, widely recognised as one of the company’s top workhorses.

The theme of WrestleMania storylines was naturally one that ran throughout Elimination Chamber, less than two months before the showpiece event. After eliminating Randy Orton from the Raw Chamber match, Kofi Kingston looks to be back on the radar of the Viper as the pair rekindle their incredible rivalry. Cesaro, too, looked to be in with a good shout of winning the Smackdown Chamber match before ultimately being denied, while Daniel Bryan just about managed to come out on top in that battle to claim a Universal Championship match immediately afterward, before Roman Reigns sauntered down to the ring to declare that title match would take place at once.

Reigns made light work of a game Bryan before Edge came out and delivered a huge Spear to the champ to all but confirm the Head of the Table will be his champion of choice to challenge at WrestleMania. 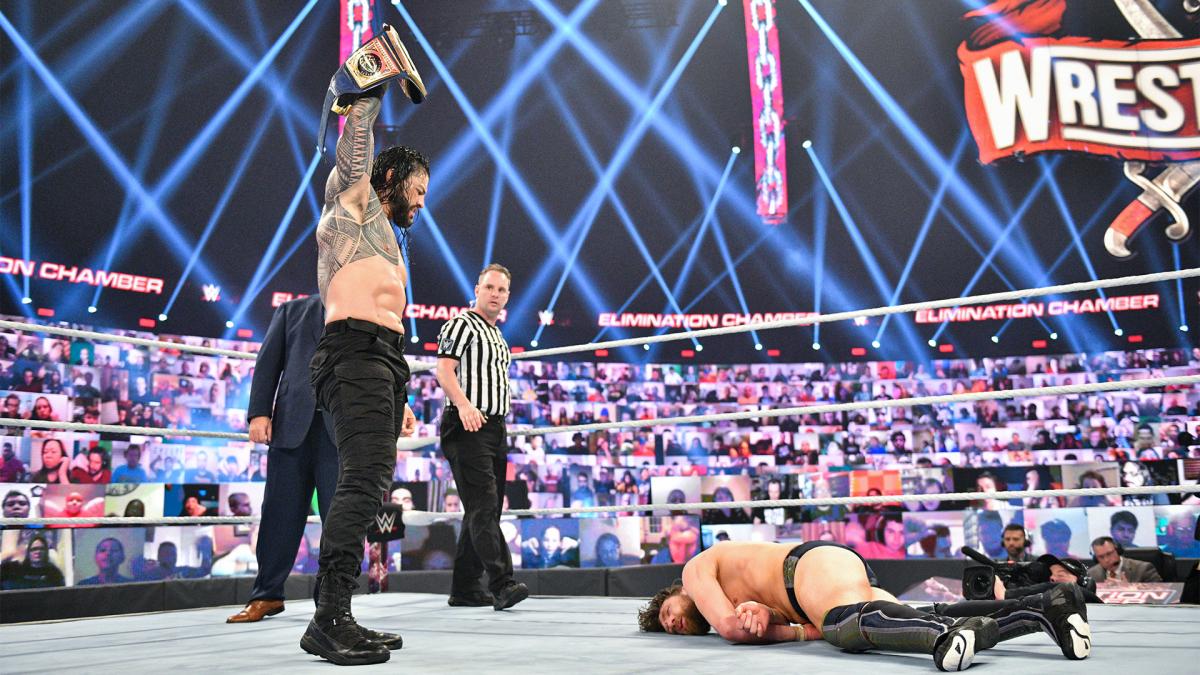 That Lashley looks set to be involved in the WWE title picture was made fairly clear not only by his involvement with Miz and McIntyre during the night, but also his loss of the United States Championship. In a triple-threat match against Riddle and John Morrison – who’d earlier won a qualifier for his spot in the match after Keith Lee was withdrawn through a reported injury – the incumbent lost out without being involved in the decision after Riddle pinned Morrison, having nailed Lashley with a crutch.

WWE’s plans to present Sasha Banks and her likely WrestleMania challenger, Bianca Belair, as tag team partners before an inevitable split continued at the event. They fell short in a match for the Smackdown tag team titles against Nia Jax and Shayna Baszler, albeit thanks to a distraction from Reginald. That there is so much pay-per-view time between Royal Rumble and WrestleMania these days isn’t to everyone’s taste, but WWE deserves credit for creating a genuine myriad of storytelling possibilities going into its biggest show of the year.

The top Championship pictures, bar that of the Raw Women’s title, now look a great deal clearer, but there are incredible possibilities still in play almost everywhere else.