Australia’s Cameron Smith entered the top 10 of the Official World Golf Ranking for the first time on Monday.

Smith rose 11 spots to No.10 following his win at the year-opening Tournament of Champions, where he set the PGA Tour’s 72-hole scoring record of 34-under par in beating Jon Rahm by one shot. Rahm maintained his No.1 spot ahead of Collin Morikawa, who was unable to wrestle the spot away from Rahm in his second attempt. 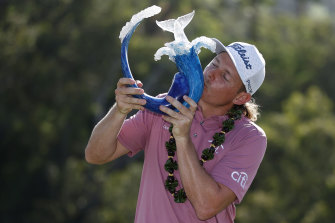 Smith is the 113th player to join the top 10 since the OWGR began in 1986, and the ninth Australian to do so. He joins Stuart Appleby, Ian Baker-Finch, Rodger Davis, Jason Day, Steve Elkington, Greg Norman, Geoff Ogilvy and Adam Scott.

Rahm and Morikawa are followed by Americans Dustin Johnson, Patrick Cantlay and Justin Thomas in the top five. Johnson was the only player among them not to qualify for this year’s Tournament of Champions.

The biggest mover of the week was Australia’s Matt Joins, who vaulted 38 spots to No.66. He finished solo third at 32 under after setting the tour’s 36-hole scoring record by posting a 62 and a 61 over the weekend.

Jason Kokrak, who finished last in the 38-player field, dropped two spots to No. 22.