DEREK LAWRENSON: The Wizard of Oz! Cameron Smith played a blinder to hit the front at the Open – but rampant Rory McIlroy is right on the Aussie’s tail heading into the weekend at St Andrews

There are not too many golfers who would relish taking on a rampant Rory McIlroy when clearly in the mood to end his majors drought, but gutsy Australian Cameron Smith would certainly count as one of them.

What a weekend we have in store at the 150th Open.

McIlroy leads a starry collection of the world’s best players seeking to hunt down the gifted Queenslander, who relaxes each evening watching Peaky Blinders and who went out on Friday and turned in a blinder of his own. 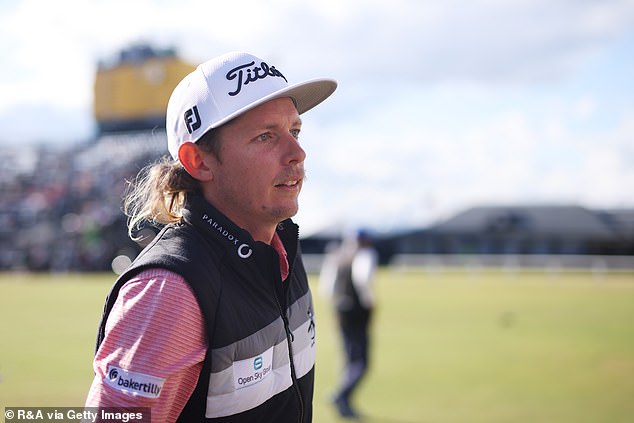 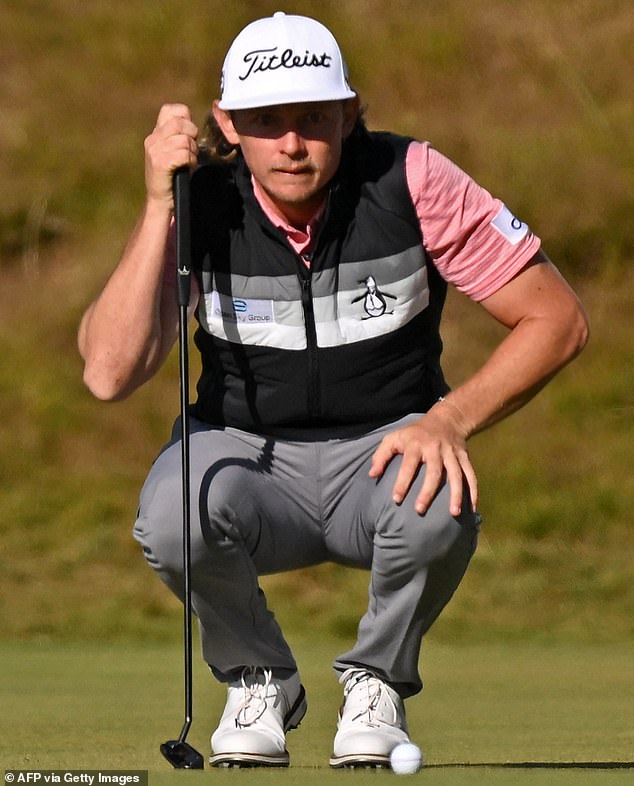 But gutsy Australian, and Open leader, Cameron Smith would certainly count as one of them 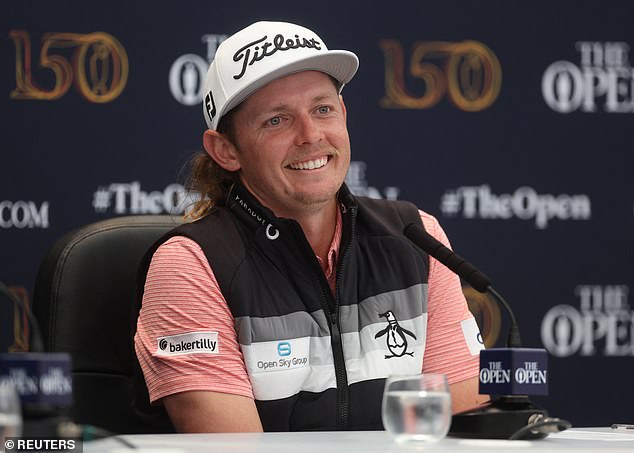 The 28-year-old carded a superb 64 for a two-shot lead over prodigious American rookie Cameron Young.

And then, alongside Norwegian Viktor Hovland, comes McIlroy at three behind after generating some of the loudest roars heard on a golf course in quite some time with a birdie on the 17th in the evening shadows for a 68.

McIlroy said on Thursday that it was important he went out and backed up his first round 66. He did that all right to cap a thrilling day’s play.

The last time an Australian won the Open at St Andrews, Kel Nagle claimed the 100th anniversary edition in 1960. Now, it is Smith who is bidding to win his own landmark staging of the oldest championship in the game.

Smith showed his mettle in claiming the Players Championship in March but took a while to get over the disappointment of losing an epic duel for the Masters to Scottie Scheffler.

Now, following a day of high emotion and a feast of attacking play, he is in position once more and this time it is the biggest prize of them all.

Asked about taking on McIlroy, there was a positive glint in his eye. ‘If that comes about, I’d really look forward to it,’ he said.

It is never easy following up an opening round of 64 but 25-year-old Young showed what he is all about by bouncing back from an early bogey to post a 69.

He might not have the profile of other Americans his age such as Sam Burns, Will Zalatoris and defending champion Collin Morikawa, but it will be a surprise if he goes quietly this weekend.

To think, no player called Cameron has ever won a major. Now, after waiting more than 160 years, two men clearly capable of becoming the first have come along at once.

What a grand occasion this day turned out to be as the weather improved markedly from a distinctly unpromising beginning and a setting unrivalled in the game absorbed another golden memory. 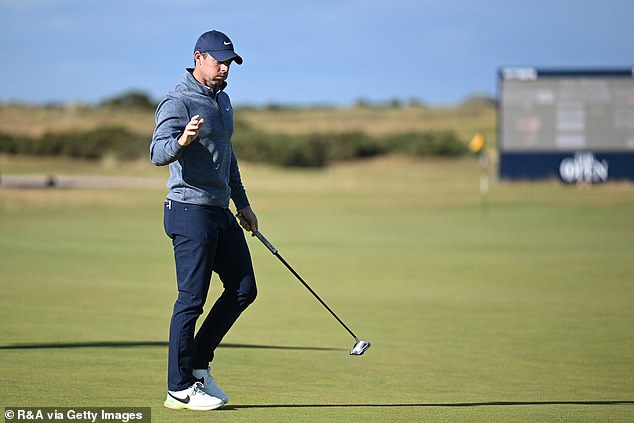 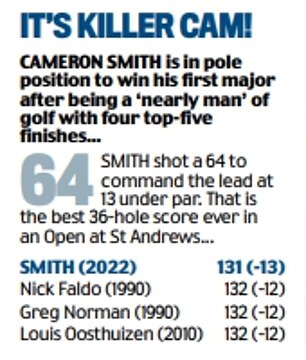 As the golfer they all looked up to waved his teary farewell, Tiger Woods left behind quite the legacy in the form of the iconic yellow leaderboard at the 18th filled with the names of dreamers who grew up fantasising about walking in his footsteps.

There was Scheffler, who wears Woods’ brand of clothing and his make of shoes. There was an array of other young Americans, illustrating the talented battalion following in Woods’ wake.

But there is no-one who fits the description better than McIlroy. In an act of perfect symmetry that he acknowledged with a tip of the cap and will no doubt treasure into old age, McIlroy’s day began as Woods’ tournament ended.

He walked down the first hole and could not resist looking over his shoulder as Woods received his thunderous ovation on 18.

As far as the vast army of spectators who followed him for five hours and 30 minutes are concerned, it is McIlroy’s responsibility now to pick up Tiger’s torch, his shoulders on whom all their Champion Golfer hopes are placed.

It says everything about McIlroy’s contented state of mind these days and the confidence running through his play that, on this day, he lived up to the mighty burden. With nine holes to go he trailed Smith by six strokes. Then he set to work. 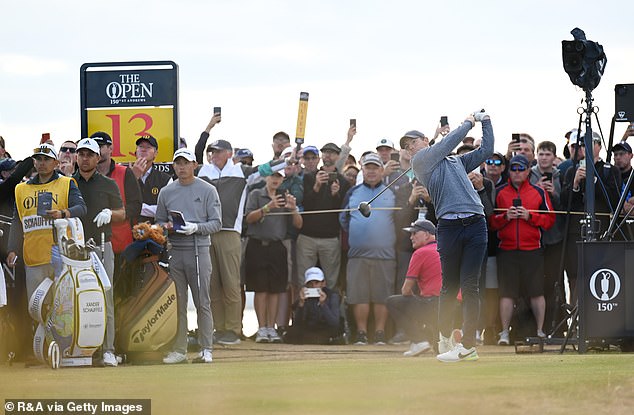 In an act of perfect symmetry the Northern Irishman acknowledged with a tip of the cap and will no doubt treasure into old age, McIlroy’s day began as Tiger Woods’ tournament ended

A perfectly-struck drive into the wind at the par four 10th found the putting surface and he two-putted for a birdie.

A marvellous tee shot at the devilish short 11th set up another gain from 12ft. The glorious risk and reward 12th yielded another birdie following another majestic drive on to the green.

A dropped shot at the 15th was retrieved at the 17th, of all holes, and a clenched first salute. He was a bit ticked off he did not birdie the 18th but it was job done, for all that.

Over the next 36 holes we appear set for a momentous collision that will conclude with traditionalists either waving their arms in euphoria or covering their faces in anguish. 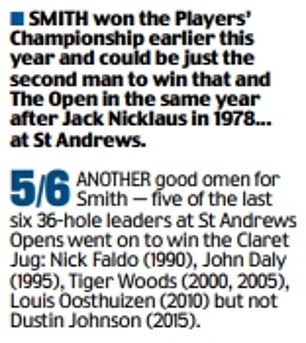 It is shaping into an epic battle between the game as it was meant to be played.

And the forces of the Saudi rebel LIV tour, who would rather not walk 72 holes but might just have been fired up by all the vituperation that came their way from Woods and R&A CEO Martin Slumbers in the build-up.

Scheffler began the majors season by claiming the green jacket and now might finish it by joining Woods, Jack Nicklaus and Zach Johnson as men who have also won a Claret Jug at St Andrews.

He shot a second successive 68 to be only five strokes adrift, alongside St Andrews specialist Tyrrell Hatton, even if he would rather not be thought as such.

Hatton makes the legitimate point that his two Dunhill Links pro-am wins were achieved on a vastly different Old Course to this burnished one, but clearly there are some good feelings that transfer from one version to the other.

Leading the LIV crew is Dustin Johnson, who led the St Andrews Open in 2015, only to collapse at the weekend and fall outside the top 40.

Asked if there were bad memories he needed to guard against, he gave a very Dustin Johnson answer. ‘I can’t even remember what happened in the third round in 2015,’ he replied.

Who are the unknown English quantities making their US Open debut?

The Masters: Tiger Woods explains lonely feeling of making a 10 at the 12th