The DP World Tour has announced the suspension of its flagship tournament, the PGA Championship, for the remainder of Thursday and all of Friday following the tragic news that Queen Elizabeth II has died. The Queen died peacefully at Balmoral Castle on Thursday afternoon.

Tommy Fleetwood shares the lead of the BMW PGA Championship with Andy Sullivan and Norway’s Viktor Hovland at eight-under par. Rory McIlroy currently sits among a cluster at four-under par in the flagship event of the DP World Tour, formerly known as the European Tour.

However, play was suspended for the remainder of Thursday and Friday after news of Queen Elizabeth’s passing emerged. The DP World Tour took to social media to relay the news.

“Following the death of Her Majesty Queen Elizabeth II, play in the BMW PGA Championship has been suspended for the remainder of Thursday,” the official DP World Tour Twitter account posted. “All facilities in the Championship Village will close with immediate effect. 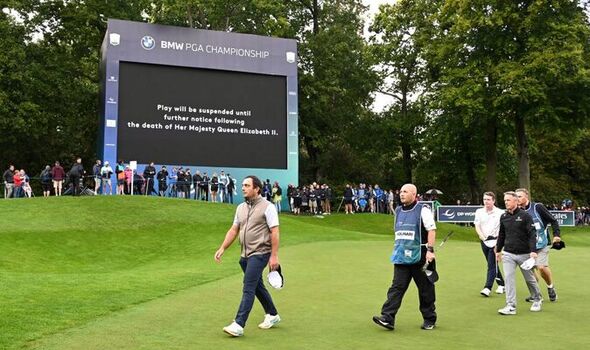 “Further updates and guidance will be provided shortly.” The account added: “Park and Ride facilities will continue to operate to ensure spectators can return home.” Shortly later, a statement from the PGA Championship confirmed there would be no golf on Friday either, and that flags at Wentworth would fly at half-mast.

The statement read: “On behalf of our members and everyone associated with the European Tour group and the BMW PGA Championship, it is with great sadness that we have learned of the passing of Her Majesty Queen Elizabeth II.

“She truly was an inspiration to people the world over. Out of respect for Her Majesty and the Royal Family, play has been suspended at the BMW PGA Championship at Wentworth Club for the remainder of Thursday and all flags at Wentworth Club will be lowered to half-mast. 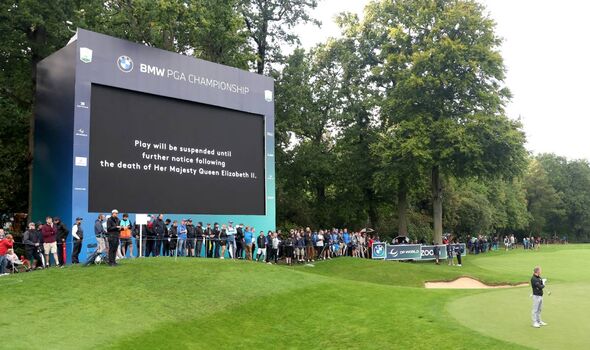 “Furthermore, no play will take place at the BMW PGA Championship on Friday and the golf course and practice facilities will be closed. Further updates on the resumption of play will be provided in due course. Our deepest sympathies and condolences are with the Royal Family at this time.”

Queen Elizabeth II died aged 96, ending the longest reign by any monarch in British history. She was the head of state of the UK and 14 other countries, including Australia, Canada and Jamaica.