Brookline, Massachusetts: Englishman Matt Fitzpatrick won the US Open, winning his first major on the same course where he took the US Amateur title nine years earlier.

Fitzpatrick shot a 2-under 68 at The Country Club to finish the tournament at 6-under 274 and beat Will Zalatoris and Scottie Scheffler by one. 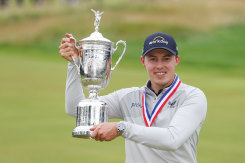 Leading by one shot, Fitzpatrick hooked his drive on No.18 into a bunker to the left of the fairway. But he hit the middle of the green and two-putted from 18 feet for par. Zalatoris had a 14-foot birdie putt to tie, but missed it by a fraction.

This marked the second straight runner-up finish at a major for Zalatoris, who lost to Justin Thomas in a play-off last month at the PGA Championship. It was Zalatoris’ sixth top-10 finish in seven majors since he made his major debut at Winged Foot in the 2020 US Open.

Fitzpatrick hit 17 greens in regulation. He becomes the first Englishman to win the US Open since Justin Rose at Merion in 2013, the same year Fitzpatrick won the US Amateur at The Country Club.

He also joins Jack Nicklaus as the only player to win both the US Open and Amateur on the same course. Nicklaus won at Pebble Beach in 1961 and 1972.

Hand trap: Kids run off with Rahms ball on 18