Bryson DeChambeau’s plans to use a 48-inch driver could be scuppered by new proposals to combat the increase in distance in golf.

A year after the release of the Distance Insights Project report, the R&A has announced its intention to limit the length of a driver shaft to 46 inches – a regulation that could come into effect and “impact the 2021 season”.

The latest announcement also proposes that officials representing all clubs, regions and Tours, will be able to impose their own regulations for equipment use, with further discussions taking place in November once the feedback has been monitored.

But R&A chief executive Martin Slumbers revealed the discussions on the driver length will resume in early March, with any new restrictions likely to be imposed during the summer. 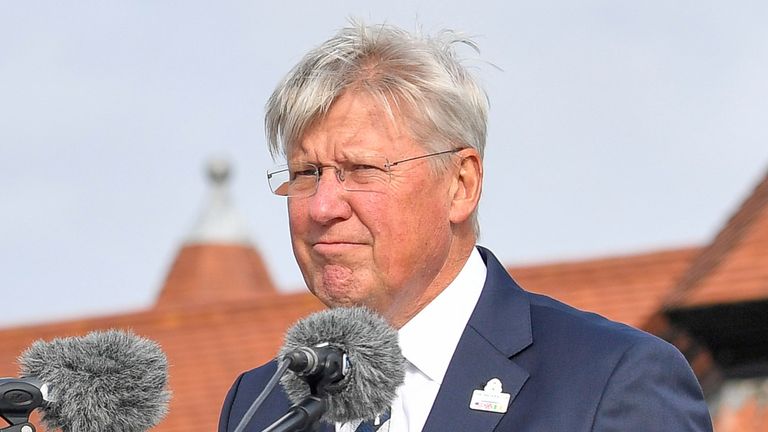 DeChambeau has been testing drivers with 48-inch shafts since winning the US Open by six shots at Winged Foot last September, although he abandoned plans to put the new driver into play at the Masters, and it now looks likely that all his testing could have been futile.

“Last February, before the pandemic changed all of our lives, we finished two years of research into the impact of distance on our sport,” Slumbers told Sky Sports News. “At that point, we concluded that longer distances, longer courses, and a longer time to play, was all taking the game in the wrong direction.

“Limiting the driver length to 46 inches is a short-term conclusion, because we had consulted with the industry on that four years ago. We are seeking comment on that back by early March, and depending on the outcome of that feedback, that is the short-term impact for this season.

“The key thing is that we take the industry with us collaboratively, we are totally committed to doing that and we are very serious about the importance of that. The club length discussion is through to March and, depending on what is said, that will impact the 2021 season.”

The likes of Jack Nicklaus and Gary Player have led the calls for golf balls used in the professional game to be “rolled back”, but Slumbers feels the ball going too far is not the biggest issue when attempting to combat the distance, and he is wary of counteracting the evolving technology that has impacted the sport.

“The main issue as I see it is that continuing length is not the right thing for the game in terms of distance, in terms of time to play and in terms of sustainability,” he added. “For me, the most important thing is the balance between skill and technology.

“The technology is great for helping to make a difficult game a little bit easier. But, at the very elite level, perhaps that balance is not there. So this an area we need to research into how do we think about equipment going forward.” Slumbers was speaking ahead of the release of the latest update from the R&A on plans to combat increasing distance in golf, which is focused on “specific areas of interest” while detailing “three proposed changes to the Equipment Rules”.

The statement read: “The Areas of Interest notice, sent to golf equipment manufacturers, follows the conclusions of the Distance Insights Report delivered last February. It is the first step of the established Equipment Rulemaking Procedures, which give the opportunity for golf’s stakeholders to provide research and perspectives on topics that might lead to equipment rules changes.

“In addition, three proposals related to equipment standards were also sent to the manufacturers and have been published – two to modernise equipment testing protocols and the other to consider the adoption of a Model Local Rule that would provide flexibility for committees, if they so choose, to limit the maximum length for clubs other than putters from 48 to 46 inches.”

The two other equipment change proposals, which will be addressed again in August, are an “update of testing methods for golf balls” and a “change to testing tolerance – Characteristic Time.”

The report also details the two specific areas of interest as:

Koepka out of Travelers after caddie tests positive