Collin Morikawa is the British Open champion, the young Californian with the cool demeanour and intelligent outlook chasing down playing partner Louis Oosthuizen and holding off the resurgent Jordan Spieth to become the first man to win the world’s oldest major at his first attempt since Ben Curtis in 2003 on the same course. He seems destined to win many more.

Spieth had closed to within a shot with birdies at the 13th and 14th at Royal St George’s but Morikawa, a group behind, also holed for a birdie at the 14th to go back to two ahead and both players parred in from there. Morikawa finished on 15 under with Spieth two shots back.

As for Oosthuizen, who had led from the first day, he was finally overtaken about 4.05pm (local time) when Morikawa made birdie at the par-five seventh and the popular South African went from bunker to bunker for a bogey six.

“The seventh hole was definitely the turning point,” Morikawa said. “At that point I felt like I was hitting good shots to give myself chances for birdie. But to get a good break off the drive, I thought I pulled it left, hit it up short, was about to putt it, hit it to tap-in range. At that point, I kind of got the round started. I’m not sure what happened to Louis with his first bunker shot, if he had a tough lie, but just to have that little switch of a two-shot swing kind of got that round started and into another gear.”

Spieth was philosophical about his second place but felt he had lost the initiative at the end of Saturday’s third round – when he finished bogey, bogey, the second of them with a three putt, the last miss from around two feet.

“It’s hard to be upset when I was a couple over through six [today],” he said. “I couldn’t have really done much more after that point. But the finish yesterday was about as upset as I’ve taken a finish of a round to the house. I walked in and said: ‘Is there something that I can break?’ I knew that was so important because I would have been in the final group.” 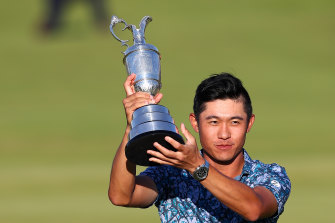 Morikawa thus secured his second major championship in his first eight starts, after last year’s win in the US PGA, with a blemish-free round of four-under 66. He moves into rarefied company with the great Bobby Jones, who won two of his first eight in 1926.

“At 24 years old, it’s so hard to look back at the two short years that I have been a pro and see what I’ve done because I want more,” the American said. “I enjoy these moments and I love it, and I want to teach myself to embrace it a little more, maybe spend a few extra days and sit back and drink out of this [Claret Jug].”

It is another tough one to take for Oosthuizen, who won the 2010 Open at St Andrews, has three top-three finishes in three of this year’s four major events and six second places in total. The US Open champion John Rahm, after a one-over start in the first round, eventually shared third place with the South African on 11 under. He was there to congratulate Morikawa when he made his way off the players’ walkway from the 18th green.

Morikawa’s feat is even more noteworthy as last week he played his first links event, the Scottish Open, and finished tied 71st, his worst finish as a professional. He decided he needed to make changes if he was to make a mark in the British Open. His first was to replace the seven- eight- and nine-iron blades he usually uses with cavity-back versions. He also switched his putting grip from the right-over-left version to the conventional one for the longer putts.

“I was just rolling the dice on hoping these irons would work,” he said. “I didn’t know if they were going to and I still need to figure out the answer. I can’t just put these irons in and hope they’re going to work for the next 15 years.” 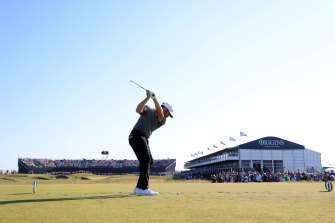 Louis Oosthuizen failed to convert his early form into a win.Credit:Getty Images

Brooks Koepka set the club-house lead at eight under in mid-afternoon with a blistering round of five under, though he would have been disappointed not to have set a higher target after only making pars on the final six holes. He finished tied sixth with Mackenzie Hughes of Canada. Dylan Frittelli, who only got in as a reserve last week after Louis de Jager tested positive for COVID-19, surpassed them eventually and finished outright fifth at nine under.

It was a disappointing day for the two Australians remaining in the field. Cameron Smith slumped to a four-over 74 for a two-under finish and tied 33rd. Adam Scott, 41, improved his position with a 68 to finish tied 46th but in the face of possible COVID-driven travel restrictions is contemplating moving his base to the US next season as he strives to secure an elusive second major.

Matthias Schmid won the Silver Medal for the best amateur, his 72 giving him a two-over total for the four rounds and a win by four shots over Yuxin Lin of China, the only other amateur of the eight who started to make the midway cut.

What golf is on Sky Sports? Majors, Ryder Cup, Tiger Woods and more