PGA Tour debutant Harrison Endycott fired a sizzling equal-best seven-under 65 to shoot up the leaderboard after the third round at the season-opening Fortinet Championship in Napa, California.

In his first weekend on tour, the 26-year-old Australian was nine under and trailed American Justin Lower, who shot a 69 on Saturday, by four shots. 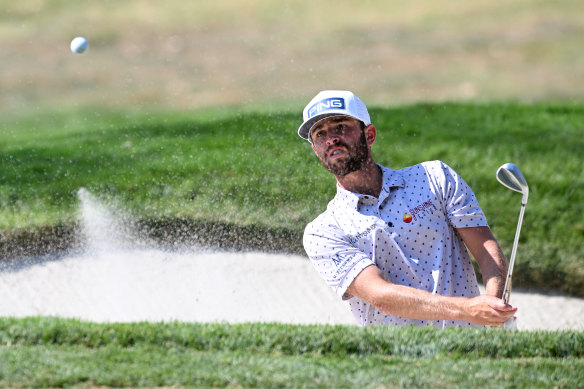 Harrison Endycott hits from the bunker on the 16th hole during the first round.Credit:Getty Images

Defending champion Max Homa was one stroke behind Lower at 12 under, along with Englishman Danny Willett after both shot even-par 72s, while South Korea’s Byeong Hun An (71) was a further shot adrift after moving day.

“Yeah, look, I played really nice out there today,” Endycott said after his bogey-free round.

Lower weathered the afternoon wind at Silverado Resort & Spa and birdied the 18th to enjoy his first career 54-hole lead in his 29th start on the PGA Tour.

“I just tried to really keep it as simple as I could, keep it in play, keep it in the fairway because I really think you can score from the fairway,” said 33-year-old Lower, who’s looking for his first tour victory.

“I’m sure I’ll be nervous, for sure, but just part of it … I mean, it’s why we play. Playing on the PGA Tour with a chance to win, it’s pretty cool.”

Davis Thompson of the US also shot seven under to be one stroke ahead of Sydneysider Endycott, while fellow Australians Aaron Baddeley (69) and Cameron Percy (72) were five under and two under respectively.

Out as a single and the first on course, Endycott took advantage of the conditions. He was hot early and birdied the first and third holes, but could have gone even lower – birdieing only one of the four par-5s in his first start since graduating from the Korn Ferry Tour.

“Oh, it was awesome. You’ve got no one to worry about and the greens were perfect,” Endycott added. “It’s been an amazing experience this week. I’m just trying to do my best every day and go from there.

“Tonight I’ll set some goals and go forward for tomorrow.”