Greg Norman arrived in London this week insisting that he “does not answer” to Saudi crown prince Mohammed bin Salman and declaring that the kingdom should “own up” to the murder of Jamal Khashoggi and “talk about it”.

However, the Australian also revealed that the Saudi Public Investment Fund had pledged $US2 billion (about $2.9 billion) in “extra funding” over the next three years to establish a breakaway global league. 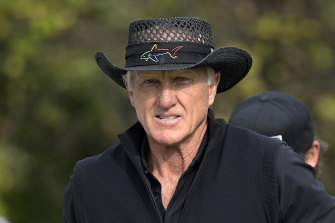 Greg Norman said the Saudis were not his bosses.Credit:AP

While the increase in finances will cause added alarm in the corridors of power of the professional men’s game, with the first $US25 million event in the $US255 million eight-tournament series taking place next month in St Albans, the claim that LIV Golf Investments is “independent” is bound to cause many eyeballs to roll.

When Newcastle United were taken over late last year the Premier League confirmed it had received “legally binding assurances that the Kingdom of Saudi Arabia will not control” the club. Of course, Norman and LIV Golf are not obliged to pass an owners’ test, but still the two-time major winner was emphatic in his statements.

When asked if he understood the concerns about the funding emerging from “a brutal dictatorship”, Norman replied: “One hundred per cent – that was reprehensible what happened to Khashoggi [the journalist and US citizen who was murdered and dismembered], right? Own up to it, talk about it. But we go back into Saudi Arabia and they’re making a cultural change. They don’t want to have that stigma.”

Technically, Norman can argue this case for autonomy – just as Newcastle have – but it does not begin to bear close investigation. LIV Golf Investments was set up by Yasir Al-Rumayyan, the chairman of Golf Saudi and of Newcastle United. Al-Rumayyan is also the governor of the PIF, having being appointed to oversee the sovereign wealth fund with estimated assets of $US620 billion. Bin Salman is thus ultimately in control of PIF and it is ludicrous to believe he has no say over LIV Golf and the attempt to revolutionise the top of the professional male game.

Since being named as LIV’s chief executive last November, Norman has consistently dismissed the charges of “sportswashing” and again is questioning why golf is coming under scrutiny when the Saudis are already involved in soccer, boxing and Formula 1, not to mention big business.

“The US government invests with Saudi Arabia, so does the UK government,” Norman said. “There’s a tranche of money investing in things like Disney and Uber that consumers all around the world are benefiting from. Do they sit back and go, ‘Oh, that’s Saudi money. I’m not going to get an Uber?’

Norman is trying to distance the series from accusations of laundering the kingdom’s reputation. “I’m not talking on behalf of the [Saudi] government,” he said. “I’m talking on behalf of my passion. And when was the last time somebody wanted to invest $2 billion into golf?”

With more than 200 employees and having already committed to $US300 million over 10 years to the Asian Tour, the outlay so far is estimated at north of $US700 million.

“We’ve just got approval to launch our schedule into 2023, ’24 and ’25, with $2 billion to back that up,” Norman told the BBC. “And we’re looking way beyond that. We are looking at decades. The notion is to change the whole look and presentation of the way the game has been played.”

LIV announced last night that it planned 10 events in 2023 followed by “a full season” of 14 events in 2024 and 2025. The tournament at the Centurion Club in four weeks is being classed by Norman as a “baiter tournament,” to lure in the big names. He claimed there would be “six members of the world’s top 50, 19 of the top 100 and 36 of the top 150” in Hertfordshire. “I’m proud of that,” he said. “Pretty impressive, We are only a start-up.” An independent one at that.

Rory McIlroy still the man to beat, but was Seminole the real winner of Sunday’s charity skins match?