UNVEILED: The wonderful Westy wedding! Lee Westwood lifts the lid on his impromptu tying of the knot in Las Vegas to his life-long partner and caddy Helen

There are not too many newly-wedded husbands who would get away with persuading their bride to spend the honeymoon lumping a 50lbs bag around a golf course.

‘What is there to complain about?’ insists Lee Westwood, with a huge grin on his face. ‘We’ve got the sun, we’ve got spectacular views. She’s a very lucky girl, isn’t she?’

Meet the new Mr and Mrs Westy, fresh from their wedding on the terrace at the Bellagio Hotel in Las Vegas last Friday and now having a ball strolling the fairways — though not arm in arm — here at the 121st US Open at gorgeous La Jolla. 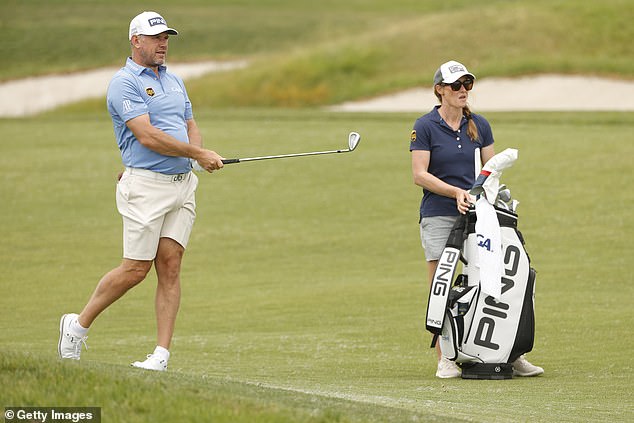 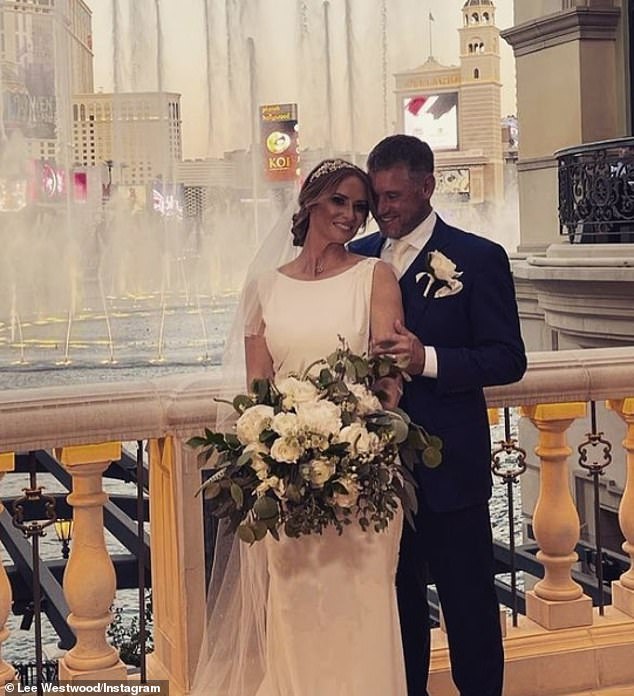 If you want to know why the Englishman is enjoying his renewed lease of life at the top of the game, a key reason is the petite figure almost dwarfed by the bag on her back, who knows all the right things to say at just the right time.

It was Westy’s idea to tie the knot with Helen Storey in Vegas. Count them as just one more happy couple-to-be fed up of the way the Government changes its mind every five minutes on the rules for weddings.

‘You can hug and scream and shout at England v Croatia, but you can’t sing and dance at your own wedding? That’s good, isn’t it?’ says Westwood.

‘We weren’t fed up of not being able to get married, we were fed up of the rules changing all the time. I think Tyrrell Hatton and his wife Emily were the same when they decided to get married quietly a couple of weeks ago. 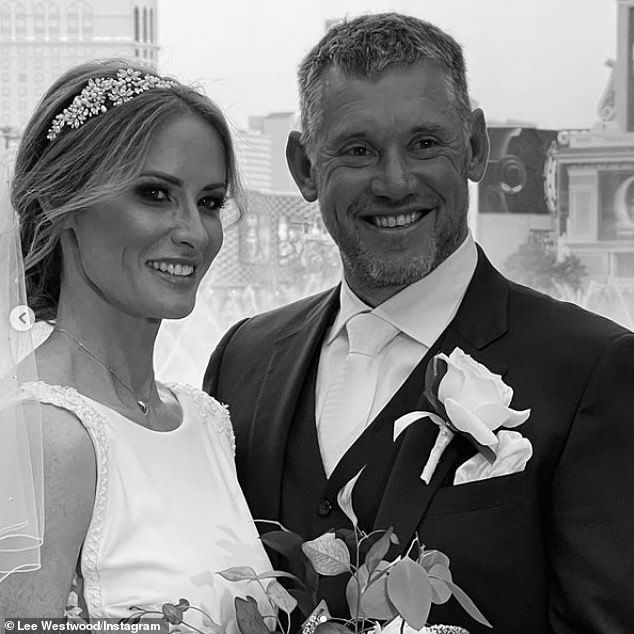 The ceremony was intimate, with Westwood deciding to have the ceremony at the last minute

‘I knew we were heading to San Diego, so it just seemed the perfect opportunity to go a few days early, put in a little practice in Vegas and get married.’

As for the details, he smiles once more. ‘You need to talk to Helen if you want all that stuff,’ he says.

Plan A had called for a wedding for 120 people at a suitably lavish setting — as did plans B, C and D. ‘In the end, it was just us two, a minister called Wilf we met literally a minute before the ceremony and a photographer who was the witness,’ says Helen, with a suitably blushing smile.

‘The hotel organised everything for us. It was a lovely setting on the terrace with the fountains in the background and then we went to the Picasso restaurant down below. Thankfully, the ceremony took place at 7.30pm, so the heat had died down a little. We just had a great time. The hotel was full, the casino was busy, it just felt like a bit of normality.’

There was only one problem. ‘My wedding dress was ruined by the end!’ adds the friendly soul, in her soft Geordie accent. ‘After walking round the pool and elsewhere for the photos, it was just completely black at the back. I’ll certainly need to find a good dry cleaners when I get home.’ 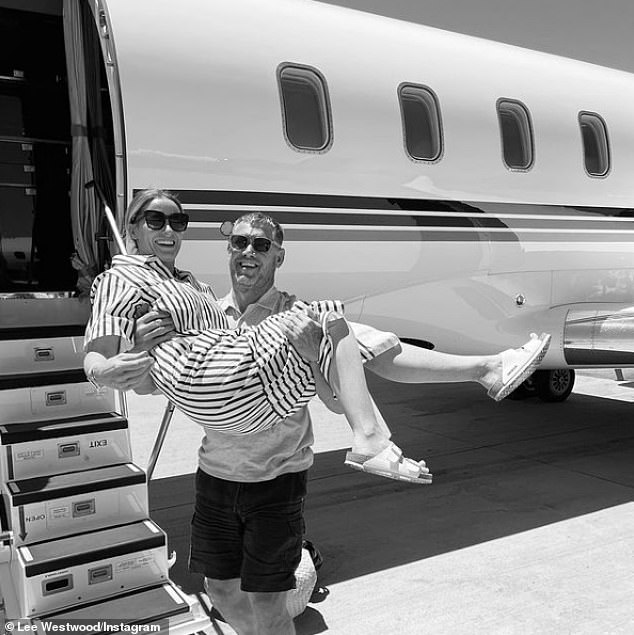 Before that, there’s a certain major for the couple to get their heads around. It happens to be the venue where Westwood was a serious contender at the 2008 US Open — where he had a ringside view of Tiger Woods holing one of his iconic putts, his face creased in ecstasy, to force a play-off he would go on to win.

Westwood missed a similar birdie chance himself on the 18th to join Tiger and Rocco Mediate for an extra 18 holes.

‘My abiding memories were playing very well and seeing one of Tiger’s great moments up close,’ he says. ‘It was very loud. As for my own left to right putt, I hit it on the line I intended but it wiggled left.

‘Of course it was disappointing at the time, but I took an awful lot of confidence from the week. I went on a good run in the majors after that. I guess it was the one that convinced me I had the game to do well in them.’

At 48, he’s still waiting for his first win, of course, but after Phil Mickelson’s triumph at the US PGA Championship — not to mention his own victory in the Race to Dubai last year and runner-up finishes at the Arnold Palmer Invitational and Players Championship in March — who’s to say it still might not happen? 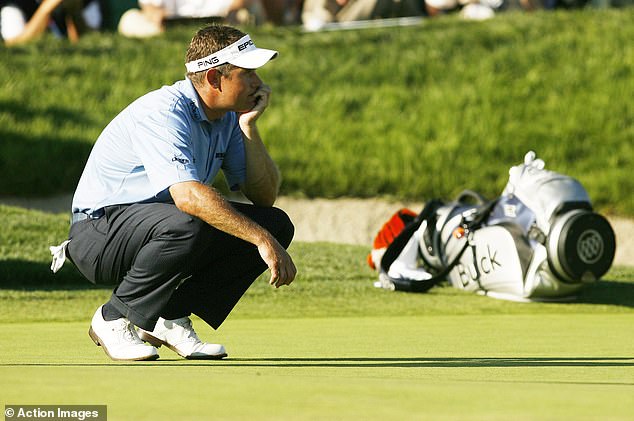 ‘I enjoyed watching Phil’s victory. I think we’ve seen players for a while now look after themselves more,’ he says. ‘Why wouldn’t you want to play longer if you have the chance? There’s every incentive.’

Keeping a watchful eye has been Dr Steve McGregor, the leading sports scientist who has worked with organisations from Manchester City to teams in the NBA, and has known Westwood for a long time.

‘In terms of the important things for golf like strength, power, mobility and range of motion, Lee might be fitter than he’s ever been,’ says McGregor. ‘It just shows the desire he still has to remain at the top.’

As Westwood wanders up the ninth fairway, he offers one final thought, out of earshot of Helen.

‘Don’t worry, we will have a proper honeymoon somewhere along the line,’ he says. 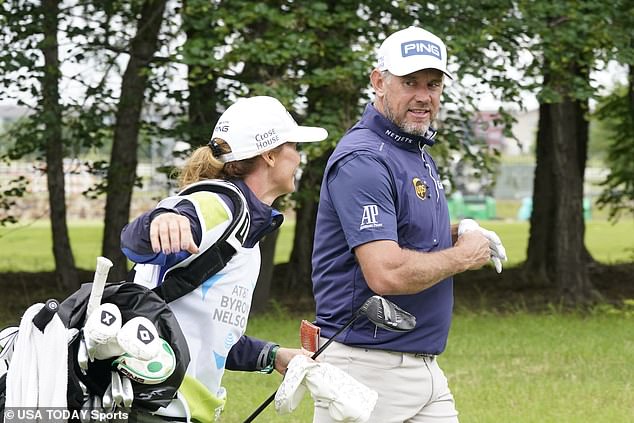 US Open: Paul McGinley on Jon Rahm’s US Open victory and an encouraging week for Rory McIlroy

Golf courses open: Are golf clubs open now? What are the new rules you must follow?