Should Greg Norman be granted an exemption to play in the British Open?

When reports surfaced that Norman was seeking dispensation to play in The Open Championship at St Andrews in July they were skewered and twisted into a weapon against the Shark.

Distended out of any context, they morphed into an entirely predictable assassination of Norman’s character.

As a two-time Open champion, Norman could have waltzed into the field each year until he turned 60, in 2015. He could have had his epilogue on his terms at St Andrews seven years ago; the problem was he was then injured beyond the point of swinging a club. At 67, he no longer benefits from that free passage.

Norman’s spokeswoman confirmed that he understands he is outside the Royal and Ancient’s window for exempted entry into the tournament, and that he will be asking the club for a special dispensation. She further clarified that Norman won’t be proceeding through the final qualification tournament as a fallback. Norman is entitled to entry to final qualifying under the R&A’s rules.

The one complicating factor of course, is Norman’s involvement as CEO in a project intended to upend the structure of professional golf as it presently exists. A project oxygenated with Saudi Arabian blood money.

“It’s facile and naive to cast people as either black or white but never anything along that spectrum.”

The Open Championship’s 150th renewal corresponds with it being the 30th time The Old Course has hosted the tournament. Usually, a fan can just jockey up any morning of the tournament, and jag a ticket at the gate. Such is the interest in this year’s championships, that the ticket ballot conducted by at the end of 2021 was oversubscribed, tenfold.

Similarly, spots for players will be rare. There’s just 156 places available on the tee sheet.

In those circumstances, “lap of honour” spots would be objectively hard for the R&A to justify granting. However, although the entry terms and conditions don’t say so in express terms, there have been special exemptions granted in the past. The sexagenarian, 1989 champion Mark Calcavecchia has been afforded exactly that chance this year.

Three “farewells”, all at The Old Course easily come to mind: Arnold Palmer in 1995; Jack Nicklaus a decade later; and Tom Watson in 2015. 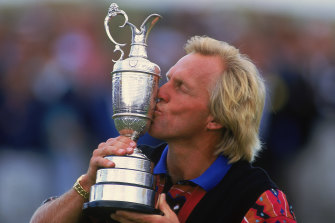 But leaving aside the practicalities, should the R&A grant Norman passage into the main field? If Calcavecchia is there: absobloodylutely.

On Norman’s mere statistics against the true greats: probably not. Numerically speaking, Nicklaus is the greatest player in history. Watson won The Open five times, and he nearly won a record-equalling sixth title in 2009. Aged 59.

Norman and Palmer each hoisted the Claret Jug twice, but numbers tell only part of the story. Palmer’s victories came in back-to-back appearances in the early 1960s, in a period when it was altogether unfashionable and particularly exceptional for the best players from the western side of the Atlantic to play The Open at all.

Is Norman’s legacy as a former Open Champion the equal of Nicklaus’, Palmer’s or Watson’s – so as to warrant the capturing of the “final goodbye” image of Norman astride the Swilcan Bridge? Of course not. 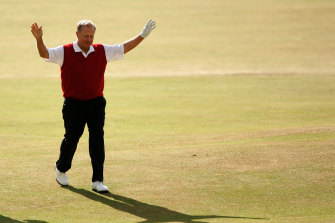 Should the R&A grant Norman an exemption into the field for The Open? Definitely.

Would the R&A afford free passage to The Shark for his final swansong performance, if he weren’t involved as CEO of the LIV Golf Invitational Series, funded by the vermilion rivers of Saudi money? Absolutely.

Would a single person be so violently opposed to LIV’s concepts for revolutionising professional golf, if the source of funds were Elon Musk, and not the murderous Saudi regime?

There’d be scores of players on the PGA Tour who would positively jump at the chance of being part of an eight-tournament season with small fields and no halfway cuts, with an aggregate purse of $350 million, if it were the Musk’s money. Don’t read too much into the unified stance that players have adopted so far – money talks, and all of that.

It’s facile and naive to cast people as either black or white but never anything along that spectrum. For a decade from the mid-1980s, Norman was the most recognisable Australian on the planet. What Norman did for golf; to invigorate and grow the sport during his playing days, especially in Australia but also elsewhere, can’t be overstated.

During that period when Norman was atop his Everest and stumbling off again often, he spent an aggregate of six years ranked as the world’s best golfer. Since the rankings began in the 1980s, only Tiger Woods has spent more time at the top of the list.

Is it appropriate for Norman to be feted by the R&A? Yes. And you’d hope that the controlling minds who make these decisions can divorce Norman the player, from Norman the suit in his current guise.

The sad reality though, is that you can see Norman being refused his request, for the same reason that the All England Lawn Tennis and Croquet Club has decreed that no Russian or Belarusian players shall be able to step onto any court at Wimbledon in 2022, lest their participation add credence to Russia’s evil war on Ukraine.

Put simply, those who control Wimbledon just don’t want to be embarrassed by Daniil Medvedev winning on Centre Court. With the same rationale, the R&A won’t want to exempt Norman into the field for The Open.

Which is pretty bloody stupid, actually. We’ve become grotesquely unsophisticated and compliant in our thinking about such matters. Anything we don’t like we just cancel, and scrubber away.

While one justifiably might not agree with Norman spearheading a Saudi-funded existential challenge to the structure of worldwide professional golf, that is no reason to ostracise him in spite of all that he himself achieved inside the ropes.

Forget recent form, Woods expects to contend at US Masters

Brooks Koepka gets into heated argument with Ryder Cup officials: ‘If I break my wrist, it’s on both of you’