Tiger mania grips Augusta! Returning hero Woods treats 60,000 fans – including thousands from Britain – to a golfing clinic as the 15-time major winner steps up his preparations for the Masters at the historic course

Tiger Woods is no stranger to rapturous applause in these parts but it’s not often extended to his mere appearance at the chipping area. Or the practice putting green. Or the driving range.

The Tiger comeback, together with the return of Augusta’s full complement of patrons, always looked the perfect combination and so it proved on a golden afternoon ahead of the 86th Masters.

His every stroll from one part of the practice facilities to another was greeted like he had just holed a 20ft putt at the 18th for a 67. It’s fair to say the patrons are glad to have him back. 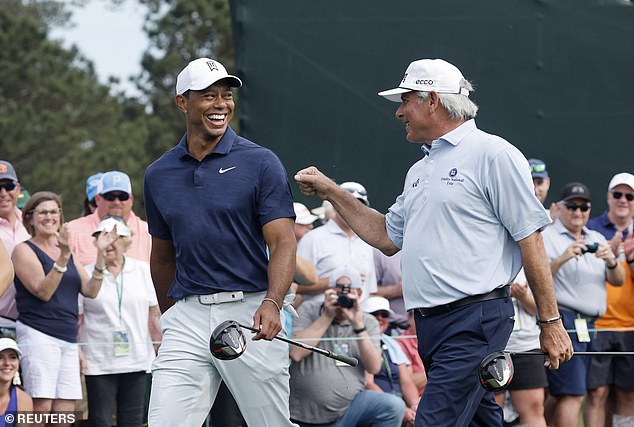 On Sunday, Woods hit just 33 practice balls before moving on to play a swift nine. This time it was a proper practice session, lasting almost 45 minutes, and focused heavily on honing his prodigious short-game skills.

What a clinic he put on. Every chip shot in the book from a tight lie was played with perfect technique. The high floater that spins on second bounce and nestles next to the hole? Check. The scudder that pulls up as if someone has it on a piece of string? Check. Bunker shots of all shapes and sizes, bump and runs as they call them here… all in sequence.

As for the long game, he contented himself with a dozen or so shots, straightening up on a couple of occasions, as if to stretch the back that has suffered so much punishment. 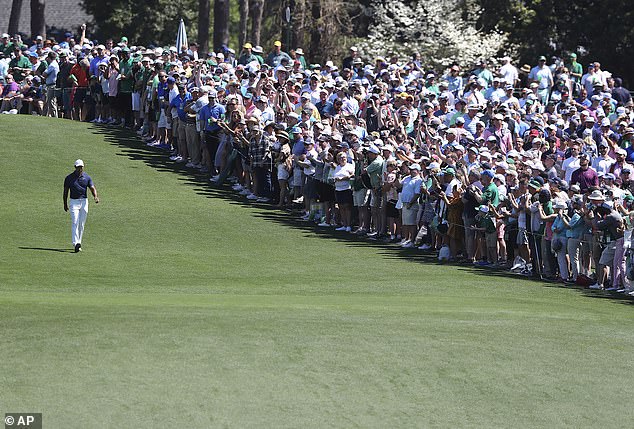 After that he waited patiently for Justin Thomas to complete his warm-up, before the pair disappeared in the direction of the first tee, where they were joined by the 1992 champion, Fred Couples.

Woods struck a perfect tee shot and moved freely enough up the steep hill to his ball, but once there it was clear it had taken something out of him. He stopped and adjusted the surgical stocking under his white trousers that protects his right leg, rebuilt in the aftermath of his horrific car accident 14 months ago.

If he does decide to play on Thursday, following what amounts to a four-day extended fitness test, it’s clear it will not be easy.

Go to any other golf tournament and Monday is usually a quiet affair. Not so at the Masters. For the first time since 2019, patrons were allowed to attend and by 9am the place was rammed. The green jackets never reveal how many tickets are issued but it always feels like twice as many attend the three practice days as the event itself, where passes are issued to the same families each year and treated like heirlooms. 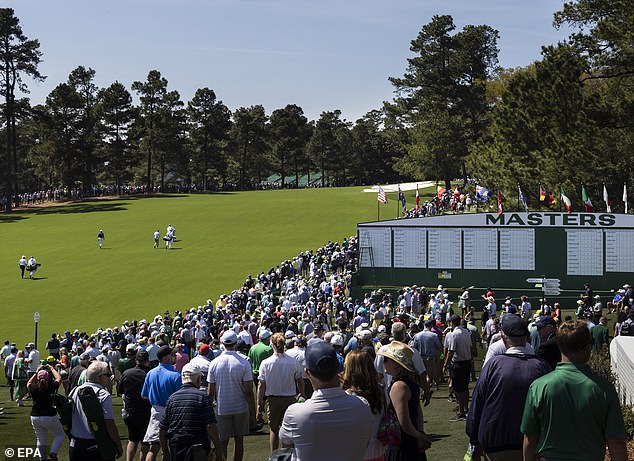 About 60,000 is a fair estimate for each practice day, with the lucky recipients decided by ballot. They come from all over the world, including 4,000 from Britain. In this instance, the majority waited patiently for three years for their reward, so no wonder they were keen to make every hour count.

It wasn’t long before the souvenir emporium had queues stretching over 100 yards. What makes the souvenirs so sought-after is this is the only place they are available, the club forsaking millions of dollars in online sales in the process. It also helps that the shirts and sweaters have arguably the best logo in American sport, unsullied by anything so crude as writing underneath.

The fact Woods turned up late allowed the majority to do their shopping, see this year’s decent display of flowers on the 13th hole and then hotfoot it back to the practice area. 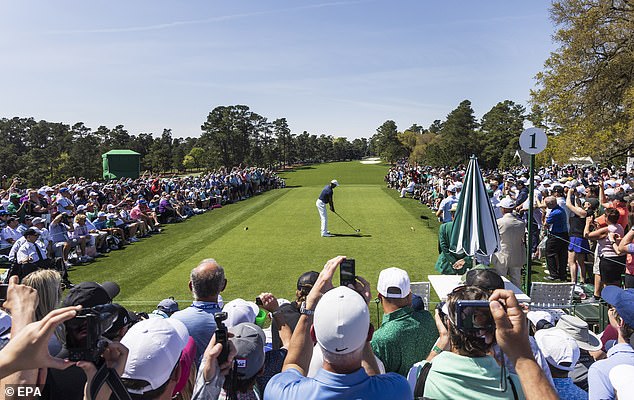 About 60,000 will attend each practice day, with the lucky recipients decided by ballot

What a contrast to the previous evening, when he played the fabled inward half watched only by a privileged few. They returned raving at how freely he was swinging and how well he played.

He missed just one fairway, and struck crisp iron shots that led to birdies on four holes, including the fateful 12th, the par three where it all turned in his favour during his miracle victory here in 2019.

Most of his time was spent playing shots on and around the greens — in other words, the shots that largely decide who ends up wearing the green jacket. Only once did he feel the need to hit a mulligan, after his iron shot to the 16th finished in the bunker. He smiled broadly as the follow-up finished 18 inches from the hole.

Two days down, two more days to go. Not for the first time, Tiger has Augusta transfixed.

Crowd full of beer, Eagles and vikings on opening day of Ryder Cup