Home » MLB » ‘Antonio Brown boiled over’: Bucs player storms out in the middle of NFL game

Antonio Brown’s days as a member of the Tampa Bay Buccaneers, and possibly as an NFL player, are over following his unprecedented mid-game exit from the field on Sunday (Monday AEDT).

The controversial wide receiver removed his shoulder pads and jersey, ran across the end zone and headed to the team’s locker room midway through the third quarter of the 28-24 win over the host New York Jets.

“He is no longer a Buc,” coach Bruce Arians told reporters after the game. “All right, that’s the end of the story. Let’s talk about the guys who went out there and won the game.”

The Buccaneers trailed 24-10 at the time and were driving on offence, but Brown was not among the players in the game. According to a Buccaneers sideline reporter, Arians had benched Brown, which set off the 12-year NFL veteran.

Fellow receiver Mike Evans tried to keep Brown from taking off his shoulder pads to no avail.

Brown had three receptions on five targets for 26 yards at the time he left, making a “peace out” gesture to the crowd while walking across an end zone while the teams were playing at the other end of the field. 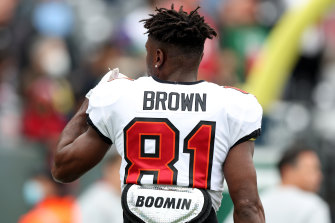 Antonio Brown is no longer a Tampa Bay player.Credit:Getty Images

“Antonio Brown boiled over, very upset on the sideline,” Fox sideline reporter Jen Hale said. “Took off his shoulder pads. Mike Evans, O.J. Howard trying to convince him to keep them on. Obviously, they were unable to do so.”

Fox cameras captured the controversial veteran receiver exiting the MetLife Stadium field in an apparent huff. He was seen tossing an undershirt and his gloves into the stands as he departed.

The 33-year-old Brown, who has 42 catches for 545 yards and four touchdowns in seven games this season, has a trail of off-the-field incidents, distractions and legal trouble dating to the start of his career with the Pittsburgh Steelers. Most recently, Brown was suspended three games by the NFL for falsifying a COVID-19 vaccine card.

In his first game back since his three-game suspension for misrepresenting his vaccination status, Brown sparkled (10 catches, 101 yards) in last week’s 32-6 road triumph against the Panthers. Afterward, he accused reporters of “creating drama” in reporting his off-field malfeasance.

Brown spent the first half of the 2020 season suspended for multiple violations of the NFL’s personal conduct policy. He turned himself in to police in Florida in January 2020 due to charges of battery, burglary of an unoccupied conveyance and criminal mischief.

“That’s obviously a difficult situation,” Brady said post-game. “I think we all want him to – I think everybody should hopefully do what they can to help in ways that he really needs it. We all love him, we care about him deeply. We want to see him be at his best, and unfortunately, it won’t be with our team.”

Brown leaves as much as US$1 million (about $1.38 million) in performance incentives on the table, according to spotrac.com

He currently has 42 catches for 545 yards and four touchdowns. Based on the one-year deal he signed in May, he would’ve earned a US$333,333 performance incentive with 50 catches, another US$333,333 for 600 yards, and yet another for five touchdowns.