ARLINGTON, Texas — Cowboys quarterback Dak Prescott was carted off the field after suffering a gruesome ankle injury halfway through the third quarter of the Cowboys-Giants game.

Prescott was injured after getting tangled with Giants defensive back Logan Ryan on a 9-yard scramble left. His right leg was turned out as he sat, bawling, near the left sideline of the red zone. The stadium went quiet as players attempted to process the injury to the quarterback who had started 68 straight games since Dallas selected him in the fourth round of the 2016 NFL draft.

Prescott was ruled out for the remainder of the game and sent to a nearby hospital for further evaluation, the team said.

The Cowboys signed longtime Bengals quarterback Andy Dalton in the offseason. Dalton finished the drive for the Cowboys, running back Ezekiel Elliott scoring on an 11-yard rush to give Dallas a 31-23 lead. 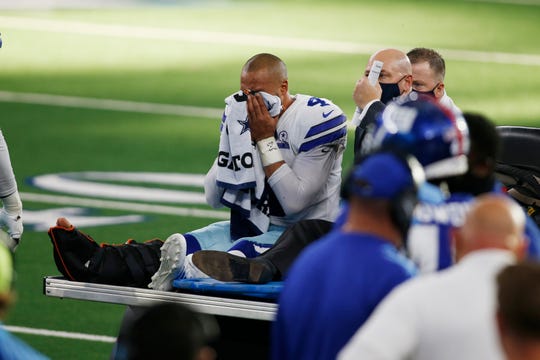 Before exiting, Prescott completed 14 of 21 attempts for 166 yards and an interception. He rushed twice for 7 yards.

Prescott also caught the first receiving touchdown of his career to give Dallas a 24-20 lead before half.

Reality check: Jags look like many expected in lopsided loss