NFL teams will have until Wednesday 4pm Eastern Time (9pm in the UK) to sign their franchise-tagged players to contract extensions.

Among the 14 players tagged, the Cincinnati Bengals’ A.J. Green and the Jacksonville Jaguars’ Yannick Ngakoue are yet to sign their franchise tenders.

The franchise tag is a resource used by teams to tie down valuable players to one-year deals, with their salaries equating to the average salary of the top five highest-paid players at their positions. While the franchise tag can display a team’s faith in a player, it can also offer little long-term security.

If the 14 players do not reach an agreement over new contracts by Wednesday’s deadline, they will play the 2020 season on the tag.

Here’s a look at the 14 franchise-tagged players… It looks increasingly unlikely that Dak Prescott and the Dallas Cowboys will agree a new long-term deal before the deadline, with the quarterback set to head into the 2020 season on his $31.4m tag.

According to NFL Network’s Jane Slater there is ‘not a lot of optimism’ that a deal will be done, meaning Dallas will have to decide whether or not to tag Prescott again next year.

That said, the Cowboys have shown no signs of wanting to step away from Prescott after a career year in which he threw for 4,902 yards, 30 touchdowns and 11 interceptions as part of the NFL’s No 1 ranked offense.

Prescott was selected in the fourth round of the 2016 Draft, winning NFL Rookie of the Year in his first season and being named to the Pro Bowl twice so far in his career. 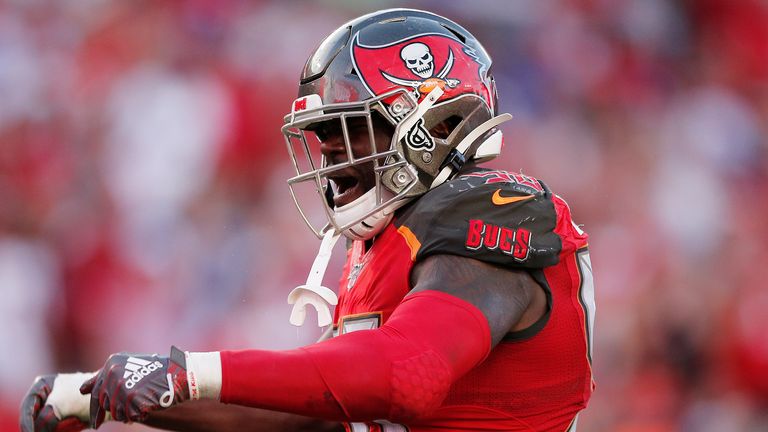 ESPN’s Adam Schefter recently reported that Barrett had accepted his franchise tender, while filing a grievance with the NFLPA to be tagged as a defensive end as opposed to a linebacker, with $2m separating the two positions.

The tag, worth $15.8m, gives Tampa Bay a chance to see if he can build on his impressive numbers as they push for the playoffs in 2020, before potentially weighing up a long-term deal next offseason. Pittsburgh Steelers pass rusher Bud Dupree has followed in the footsteps of Barrett by filing a grievance to be paid as a defensive end instead of a linebacker.

Dupree is due to earn $15.8m as a linebacker in 2020 after signing his franchise tender in May, but could yet add $2m to that if changed to a defensive end.

NFL Network’s Ian Rapoport reports that a long-term deal is not close for the 27-year-old, who had 68 tackles and 11.5 sacks last season. Bengals wide receiver Green is one of those yet to sign his franchise tender, which would be worth around $17.9m over the next year.

The nine-year veteran didn’t play a game last season due to torn ankle ligaments suffered during a preseason practice, however, he offers the talent and experience to be a vital weapon for No 1 overall pick Joe Burrow.

The closer Wednesday’s deadline gets, the more likely it seems that Green plays under the tag before testing free agency next year. Safety Anthony Harris has signed his $11.44m franchise tag with the Minnesota Vikings as just the third player to receive the tag from the team.

Harris was tied-first in the league with six interceptions in 2019 and attracted interest from the Cleveland Browns earlier this offseason.

With the Vikings likely to prioritise running back Dalvin Cook’s contract demands, Harris looks set to play on his tag across the next season. Matthew Judon proved a valuable leader on the Baltimore Ravens defense last year with a career-high 9.5 sacks to earn a place at the Pro Bowl.

Upon Judon signing his franchise tag it remained to be seen whether he was doing so as a defensive end or linebacker. He and the Ravens subsequently agreed to a compromised salary of $16.808m, the average of the $15.828m tag for linebackers and the $17.788m tag for defensive ends.

Having ranked 27th in sacks last year, the Ravens couldn’t afford to lose Judon, who will now get support from veteran Calais Campbell after he was traded to Baltimore by the Jaguars. Chris Jones has emerged as one of the more complicated cases within what has been a largely uneventful franchise-tag period.

According to ESPN’s Adam Schefter, Jones and the Chiefs have agreed a new four-year, $85m deal including $60m in guarantees.

Chiefs get it done with Chris Jones

The defensive tackle is said to have been seeking $20m after leading the Super Bowl champions with nine sacks in the regular season.

Aaron Donald of the Los Angeles Rams and the Indianapolis Colts’ DeForest Buckner are the only two defensive tackles in the league currently earned upwards of $20m annually. It’s all become rather quiet of late regarding Yannick Ngakoue’s future in Jacksonville.

Ngakoue has made no secret of his desire to move on from the team this offseason and is yet to sign the $17.8m tender for 2020.

The 25-year-old went public with his unrest as he engaged in a Twitter spat with Jags co-owner Tony Khan, demanding a trade to which Khan replied by citing the need for better compensation.

NFL Network’s Rapoport claims there remains some trade interest in the pass rusher heading into Wednesday, although any deal would require some work so late in the day.

Speaking in April, Jags general manager David Caldwell told ESPN’s Mike DiRocco: “I think his options are very limited at this point in time. We’ll welcome him back with open arms when he’s ready to come back, and we look forward to it.” 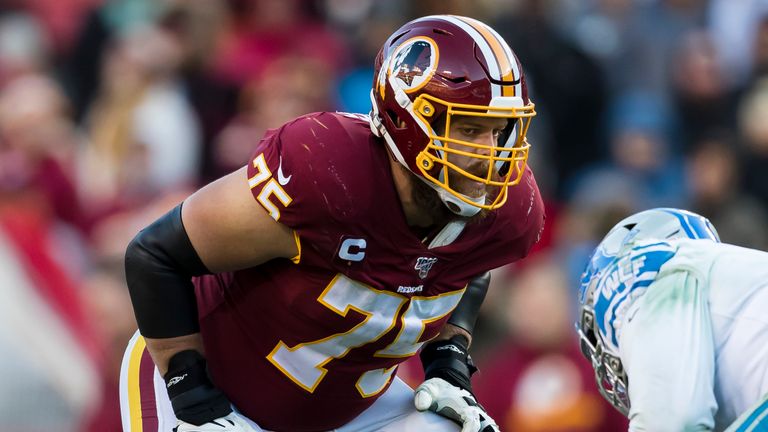 Washington right guard Brandon Scherff will be another of those unable to reach an agreement on a long-term deal before the deadline, reports ESPN’s John Keim.

The team “will wait” until the end of the season to try and secure an extension after placing the $15m tag on Scherff in March.

Scherff, the fifth overall pick in 2015, featured in just 11 games last year due to a shoulder injury but remains a key figure after three Pro Bowl selections in five seasons.

Retaining him is a wise move for the franchise as they look to get the best from second-year quarterback Dwayne Haskins. Running back Derrick Henry will meanwhile not receive a long-term extension from the Tennessee Titans, reports ESPN’s Schefter.

The former Heisman Trophy winner was outstanding in 2019 as he produced a league-high 1,540 rushing yards and 16 touchdowns to help the Titans reach the AFC Championship game.

Henry signed his franchise tender in April and is due to pick up $10.27m for the coming season after seeing quarterback Ryan Tannehill earn a four-year, $118m extension in March. The New York Giants raised eyebrows in October when they traded two draft picks to the New York Jets in exchange for Leonard Williams as they found themselves short of proven pass rushers.

Though Williams managed just half a sack in eight games, the Giants opted to tag the former first-round pick in view of him getting a better opportunity to prove himself in 2020.

Rather than allowing Williams to leave in a manner that would have exposed an already questionable deal, the Giants are giving him the chance to flourish under new defensive coordinator Patrick Graham.

Rapoport recently reported that the plan is for Williams to play under his tag before deciding on the next steps in 2021. Justin Simmons is one of the more likely candidates to actually sign a multi-year extension ahead of the deadline.

The Broncos remain in discussions with the safety to see if they can reach an agreement in time, according to NFL Network’s James Palmer.

General manager John Elways previously insisted that tag was simply working as a “placeholder” while both parties negotiated a deal, however, the impact of the coronavirus pandemic has cast uncertainty over all off-field business in the NFL in regards to salary cap implications.

Simmons, who is due to make $11.44m on his tender if he doesn’t sign a new deal, had 68 tackles and four interceptions last season. The New England Patriots placed the non-exclusive franchise tag worth $14.781m on left guard Joe Thuney in March as they looked to lock down a man who hasn’t missed a start in four years.

New England recently recouped $7.79m after settling grievances regarding Antonio Brown and the late Aaron Hernandez, while Cam Newton’s cheap deal has also put the organisation in healthier shape when it comes to cap space.

While a deal looks possible, the likelihood is Thuney plays under the tag. Los Angeles Chargers tight end Hunter Henry is not expecting to sign a new deal before the July 15 deadline.

“I don’t think anything will get done, but we’ll see,” he said, per Southern California News Group’s Gilbert Manzano.

“I’m not worried about it. I’m just going to go out there. I get a chance to play this year and do my thing this year. I’m pretty locked in on what I got ahead of me in the 2020 season. That’s what I’m locked in for, you know, I don’t like to look too far ahead.”

Having signed his tender Henry will be owed $10.6m next season before potentially hitting free agency in 2021.

After missing the entire 2018 with a torn ACL, Henry suffered a left knee injury in the 2019 opener before returning in Week Six and going on to record a career-best 652 receiving yards across the remainder of the year.

“To me, I have so much to prove,” Henry said. “Honestly, everybody knows my history of injuries. Unfortunate injuries that have happened in my career and I feel like that has held me back a little bit sometimes. I’m just eager to get through something that I haven’t been able to do for a full season.

NFL Draft 2020: When is the NFL Draft and what time does it start?

Not guilty pleas for Baker, Dunbar in robbery