The Colts, Giants, Dolphins and Jags were all victorious, Denver ended Dallas’ six-game winning streak, the Falcons held off a late surge to beat the Saints, while Arizona and the Chargers got back to winning ways.

The Browns won without Odell Beckham Jr, while the Vikings blew another double-digit lead to lose another close game, this time against the Ravens.

Taunting penalties have tainted the season and we’re all waiting for the day when the NFL pulls the plug on this particular crusade.

With less than four minutes remaining, Pittsburgh were 23-20 up and driving. On third down, Bears linebacker Cassius Marsh sacked Ben Roethlisberger for a seven-yard loss.

Marsh took several paces toward the Pittsburgh sideline and was flagged by referee Tony Corrente for taunting. 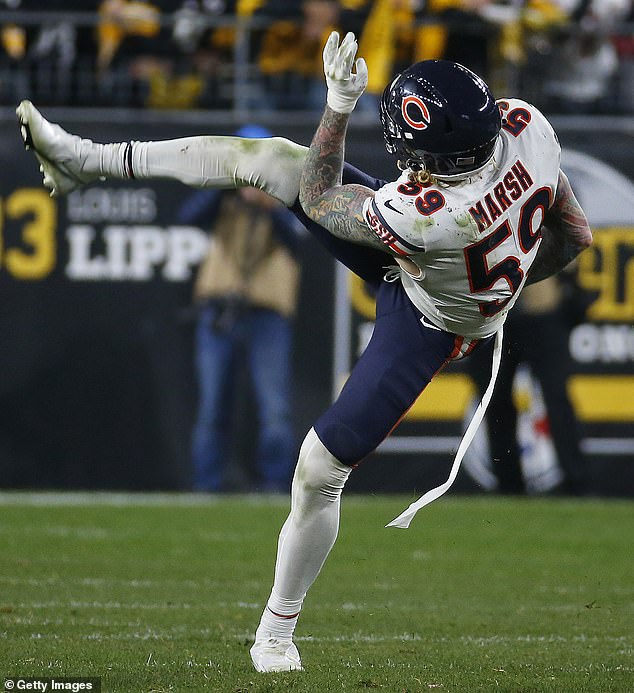 But not before this happened…

After the game – which Chicago lost 29-27, despite scoring 21 fourth-quarter points – Marsh said he was ‘hip checked’ by Corrente.

‘I just think that was incredibly inappropriate,’ Marsh said.

He was also irked by getting a taunting penalty, saying: ‘I think that one was just bad timing. It’s pretty clear to everybody who saw it that I wasn’t taunting.

‘I’ve been doing the celebration my whole career. It’s just sad to see stuff like that happen in a close game like that.’

During the strangest game of this other-worldly strange season, Josh Allen the quarterback faced off against Josh Allen, defensive end.

Jags Josh became the first player since 2018 to have a game with a sack, an interception and a fumble recovery. 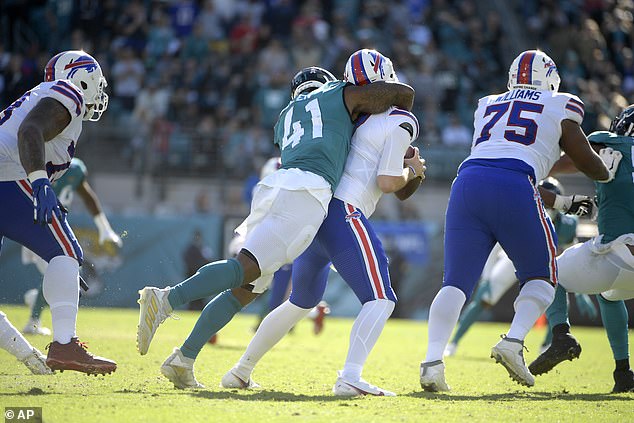 Going into the game, Buffalo were 14.5-point favourites but lost 9-6.

Cornerback Shaquill Griffin explained his side’s shock victory, only their second this season.

‘I was just looking on their sideline and one thing I know is I was like, “They don’t have the same energy as us”,’ he said after the game.

‘If you feel like one team deserved this win, it’s us, but you’ve got to believe that.’

He continued: ‘That’s one thing I kept preaching at everybody else: “Look on the sidelines, watching them walking around, it’s like they don’t care. They don’t deserve this. Let’s show them why.” So now we’ve got to continue that momentum.’ 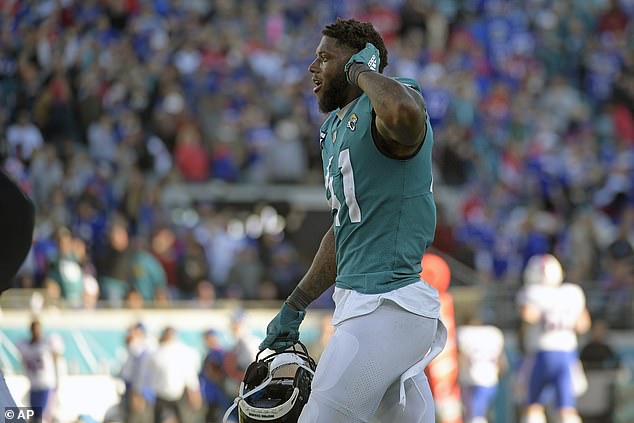 CURSE OF THE MANNING CAST

Every time an active player appears on ESPN2’s alternative broadcast of MNF, their team loses the next week.

Travis Kelce on week one, Chiefs lose in week two

Russell Wilson on week one, Seattle lose in week two

Kirk Cousins and the Vikings always look outstanding on their opening drive. It’s the rest of the game which appears to be a problem, when the Vikings quarterback forgets that Adam Thielen and Justin Jefferson are on the field.

While Cousins has cut down the interceptions so far this season, his team’s inability to close out games sees him join an unlikely triumvirate.

As part of the Government’s botched attempt to overhaul the standards system, 19 MPs who voted to protect Owen Paterson were reprimanded by Kathryn Stone, Parliamentary Commissioner for Standards.

Peter Bone, MP for Wellingborough, was named by the Times for failing to declare an £13,532 donation from an American football team.

‘It was in my role as chairman of the APPG for American football. The secretary that we had at the time told us they had filed, but hadn’t and so as soon as we found out they hadn’t filed, we filed it and therefore was filed late, but I did not receive any money whatsoever.’

The Browns placed Odell Beckham Jnr on waivers and proceeded to play the most complete game this season, walloping the Bengals 41-16.

Were the two connected?

Bill Belichick leapt to the defence of quarterback Mac Jones after the Patriots rookie grabbed the ankle of Panthers defensive end Brian Burns.

It happened after Jones was sacked by Burns, causing a fumble. As players pursued the loose ball, a floored Jones grabbed Burns’ right ankle and twisted it.

Burns was helped off the field in the first quarter of the 24-6 defeat.

‘Definitely thought it was a dirty play,’ Panthers linebacker Haason Reddick said after the game. ‘I actually saw and witnessed the play while it was happening. At first it felt like he was trying trip or kick Burns. And the next thing you know I saw him tugging on Burns’ ankle. I thought it was completely dirty. Hopefully, it’s something the league addresses.’ 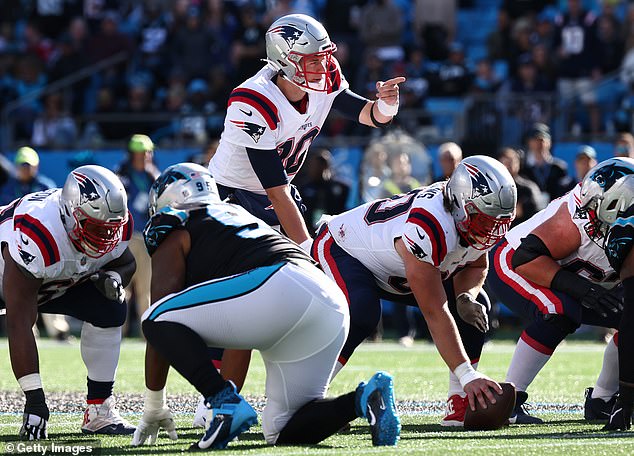 After three straight wins, Jones and the Patriots are 5-4 and firmly in the AFC playoff race

Shaq Thompson agreed: ‘That was some BS on Mac Jones’ part. Hopefully they fine him or something like that.’

But Belichick told The Greg Hill Show on Monday: ‘I think he thought Burns had the ball.’

Make your own mind up.

It is the second week in a row that the Raiders have released a member of their 2020 draft class.

Henry Ruggs III, the 12th overall pick, was released after killing Tina Tentor and her dog while drunk driving his Chevrolet Corvette at 156mph.

And now cornerback Damon Arnette – taken surprisingly high at 19 overall – has been cut. In his first year, he crashed four rental cars in a little over a month, but after posting threatening videos with firearms, he finds himself out too.

Raiders GM Mike Mayock said: ‘We cannot stand for the video of Damon Arnette with a gun threatening to take a life. The content was unacceptable.’

It means that the Raiders’ draft class will go down as one of the worst in history.

NO TIME TO REMINISCE

Coming off the back of a 30-16 defeat by the Broncos, Dan Quinn was inevitably asked about his eventful time in Atlanta ahead of Sunday’s visit of the Falcons.

‘You guys saw the performance yesterday. I’d say we don’t have time for a trip down memory lane, we’ve got s*** to fix’ was his curt reply.

The 26th overall pick of the 2020 draft was unexpectedly thrust into the limelight after 18 months sitting behind the unvaccinated – and duplicitous – Rodgers.

And it wasn’t good. 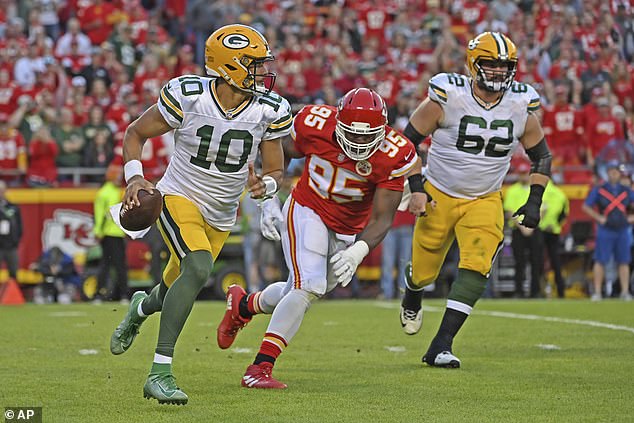 The Packers let the Chiefs off the hook 13-7, with Love struggling against the blitz and finishing the game 19-of-34 for 190 yards, a touchdown and an interception.

During the game, cameras panned to Love’s mother Anna and girlfriend, seated at the very back row of Arrowhead.

It turns out that his mother has been to all of Love’s games since college – even the ones he wasn’t playing in.

‘She’s been doing that since college when I was redshirting as a freshman, knowing I’m not even suiting up to see the field, she was there. I tell her, “You know I’m not playing, you don’t have to go out of your way to come to these games”. She’s like, “No, I’m going to be there. I want to see you.”

‘So, that’s been awesome. She’s been at every game. It’s nice to know she’s there. I try to look for her in the stands. It’s an awesome feeling. She’s great. She’s amazing. Just shows how much she loves me and cares about me to be there.’