SAN DIEGO — The folks on Madison Avenue have no interest in lining them up for endorsements. The national TV networks have snubbed them all year.

The Tampa Bay Rays could care less what anyone thinks of them.

All they know is that you’re about to see a whole lot more of them in October, on baseball’s biggest stage.

The Rays advanced to the World Series for only the second time in franchise history, knocking off the defending American League champion Houston Astros, 4-2, Saturday night in Game 7 of the ALCS.

“We don’t really worry about what people say on the outside,’’ Rays outfielder Austin Meadows said. “We know how good we are. We can compete with anybody."

So, go ahead and criticize their style of play, but the Rays are going to keep winning the only way they know how, playing spectacular fundamental baseball.

“Regardless of the opinions that are out there,’’ Rays manager Kevin Cash said, “the object and the goal is to win games. We’ve done that at a pretty good clip. Our players create an environment in viewing that I would think that fans would enjoy to watch.

“If you watch us play day in and day out, we’ve got a special group of players and personalities who really enjoy playing the game, and playing the game with each other.’’ 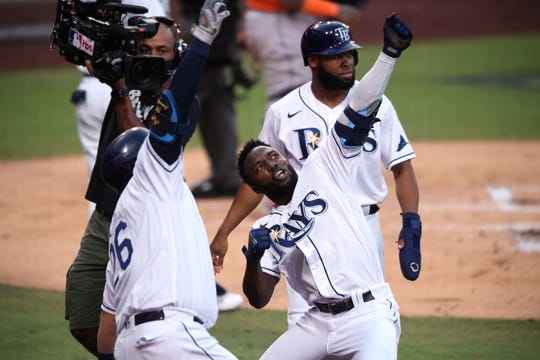 The Rays don’t have any marquee stars, although Randy Arozarena is quickly becoming one, hitting his seventh postseason homer in the first inning, and becoming the first rookie position player to win the ALCS MVP.

“He is the best player on the planet,’’ said Rays center fielder Kevin Kiermaier, who played in his first game since being hit in the wrist in Game 4. “It’s incredible.’’

And their payroll is the third-lowest lowest in all of baseball at $27.4 million, with the smallest fanbase, playing in an antiquated stadium.

No one will ever confuse them with the ’27 Yankees, the Big Red Machine, or the Atlanta Braves of the 90’s, but, man, can they play baseball.

THE GREAT RANDINO:Rays OF sets rookie record for playoff homers

The Rays may be baseball’s poster boys for the analytic world, with their openers, four-man outfields, no traditional closer, and platoon at nearly every position, but they win the old-school way.

Their starters can shut down anyone, as veteran Charlie Morton proved again, winning his major-league record fourth consecutive winner-take-all-game, suffocating the Astros’ hopes of becoming only the second baseball team in history to overcome a 3-game-to-0 deficit. He shut them out for 5 ⅔ innings, giving up just two hits. He is now 4-0 with a 0.47 ERA in elimination games.

He was only the second pitcher in history to win Game 7 for one team — the Astros in the 2017 World Series — and then facing the same team in another Game 7, joining Roger Clemens who did it with the Boston Red Sox and Yankees.

“He’s unbelievable,’’ said Rays shortstop Willy Adames. “Every time he’s on the mound, we have a lot of confidence in him. We trust him. He’s a true professional.’’

Morton, 37, barely even broke a sweat in this game. He gave up a two-out single to Michael Brantley in the first inning, and retired 14 consecutive batters. Yet, after a walk and an infield single, Cash turned to his vaunted bullpen.

Their bullpen, with a record 13 relievers producing saves, is deep and talented. Nick Anderson, who gave up only five hits the entire season, picked up where Morton left off, pitching two shutout innings. Pete Fairbanks came in with two outs and two runners on in the eighth, and finished them off.

And, oh, how they play defense better than anyone in the game, turning 10 double plays in the ALCS.

When the Rays were eliminated in five games by the Astros a year ago in the AL Division Series, they knew they’d be back to the postseason, with nothing less than a World Series championship in their sights.

“We learned a lot playing five games against Houston,’’ Cash said. “There were things in those experiences and playing in that environment that are led our guys to believe that we can really be right in the thick of things coming into the 2020 season.

“And they really have taken that approach the entire season-long and postseason.’’

Yes, and as painful as it was being eliminated by the Astros, it at least gave them experience playing in winner-take-all games, beating the New York Yankees in the elimination game in the Division Series, and now the Astros.

Now, with only Los Angeles Dodgers or Atlanta Braves standing in the way of their first World Series, they’ve got a bandwagon of believers.

“That’s a recipe for winning championships.’’

Man Utd signing can provide solution to Bruno Fernandes’ frustration
Recent Posts
This website uses cookies to improve your user experience and to provide you with advertisements that are relevant to your interests. By continuing to browse the site you are agreeing to our use of cookies.Ok