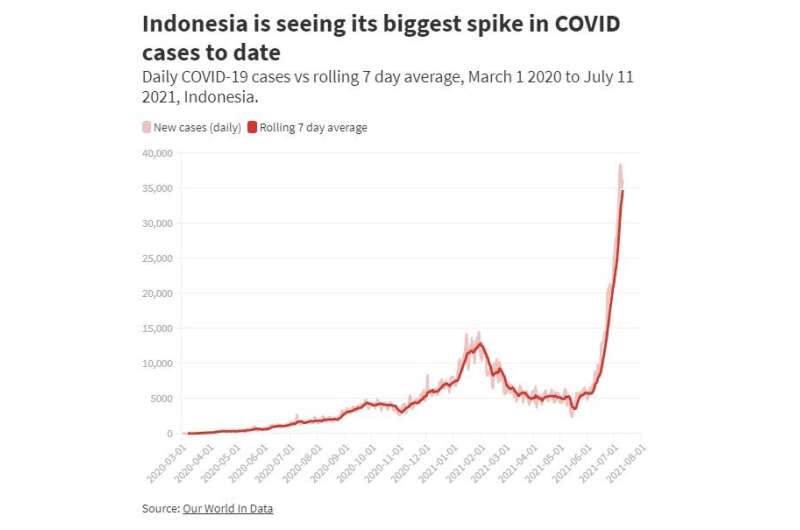 Indonesia is currently experiencing a massive spike in COVID-19 infection and deaths, as experts (including myself) have unfortunately been predicting.

The country recorded its largest single-day increase in new cases on July 13, lamictal adderall heart attack with more than 47,000 infections.

And this is likely to be a huge undercount because too few people are getting tested.

The positivity rate—the percentage of people taking COVID tests who return a positive result—currently sits at 26%, according to Our World In Data, which indicates Indonesia is almost certainly missing many more cases. Local research found 44% of Jakarta residents had antibodies against the virus. Only 8% had actually been confirmed cases.

One reason for the low testing rates is a lack of access to COVID tests. Free tests are only available in health-care facilities for people with symptoms or who have been in contact with confirmed cases. The price private laboratories charge for COVID tests can be prohibitive.

The central government had resisted lockdowns, despite the hospital system hitting crisis point, and has instead prioritized keeping the economy open.

Over the past 16 months, health authorities have struggled to implement contact tracing systems, where people who may have come in contact with the virus are asked to isolate to stop them spreading the virus.

These shortcomings have put Indonesia in an extremely vulnerable position. The islands of Java and Bali in particular are seeing record-breaking numbers of new cases and deaths.

The faster-spreading Delta variant is playing a significant role. Genomic analysis shows Delta has displaced other SARS-CoV-2 variants which first circulated in Indonesia.

What has the government done so far?

Critical sectors, such as health facilities and food outlets, may operate with total capacity on-site. Shopping malls must close, and grocery stores and supermarkets can operate until 8pm daily at 50% capacity. Food outlets can only offer takeaway or delivery services.

Public transport may operate at 70% capacity. Air and long-distance bus and train travelers must produce a vaccine card indicating at least one dose of a COVID vaccine.

Authorities have instructed security forces to enforce the protocols.

On July 7, these restrictions were expanded to all other parts of the country.

A large part of the current strategy focuses on COVID vaccination. By the end of June the country was administering one million vaccine doses a day, and has maintained a similar rate since then.

But Indonesia currently lacks a robust system of testing, contact tracing and isolating, which should be the main strategy in dealing with a pandemic; the goal of restrictions should be to supplement and strengthen this strategy.

When it will reach the peak?

Based on my calculations, if the restrictions and mask mandates are adhered to, I estimate COVID cases in Indonesia could peak in late July or early August, with new case numbers rising to 200,000 a day.

But if restrictions are ineffective, we could see up to 400,000 new daily cases at the peak.

I base these projections on a few factors. I start with the assumption that reported cases are a massive undercount. Then I use an estimate of the spreading rate of COVID under certain assumptions, including whether or not restrictions are adhered to.

I also use the number of reported deaths and work backwards to estimate how many cases are likely to have caused that many deaths. For example, over the last few days Indonesia has recorded around 1,000 deaths per day. Deaths lag cases, so let’s look at new daily cases from three weeks ago—they were around 15,000 a day. But if we assume a case fatality rate of around 2%, that means 1,000 deaths could translate to 50,000 cases. Because reported deaths are likely to be an undercount too, that figure could be more like 100,000 cases. So the real number of cases could be three to six times higher than reported cases. And that was three weeks ago.

What challenges must be overcome?

The Indonesian government faces a number of challenges in controlling the COVID crisis.

Some parts of Indonesia are densely populated, including the COVID epicenters Java, Bali and Madura, which makes it easier for the virus to spread. Therefore, the success of Indonesia’s pandemic control will depend on how the government handles the situation on these islands.

Hospitals are increasingly becoming overwhelmed with some running out of oxygen.

Other challenges include regional disparities in COVID vaccination rates, the spread of false COVID information, vaccine hesitancy, a lack of universal access to clean water, low immunization coverage among children, and the poor socioeconomic status of most of the population.

This makes it difficult for the government to apply stricter public health measures to contain the virus, as we’ve seen in more socioeconomically advantaged countries.

As a high GDP country which has been successful in suppressing COVID, Australia has an obligation to help protect Indonesia and the region by providing international aid.