The Australian Grand Prix is expected to be cancelled for the second year in a row as a result of the coronavirus pandemic.

The multi-million-dollar event was moved from its usual March date to November this year, after its cancellation in 2020. 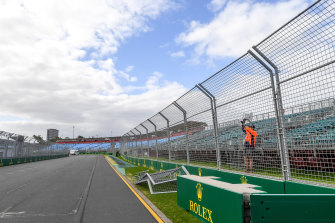 The grand prix was called off in Melbourne last year due to the coronavirus pandemic.Credit:Justin McManus

The Australian Grand Prix Corporation presented a COVID-safe plan to the government, arguing the event could be run safely for crowds and the community at large, with racing teams operating in a bubble.

But the plan appeared less politically feasible on Friday when Prime Minister Scott Morrison announced a new national coronavirus plan that will slash international flight numbers by half from July 14.

Organisers need several weeks’ notice to cancel shipping arrangements, as some equipment is sent by sea.

Australian Grand Prix corporation boss Andrew Westacott was on Tuesday morning not in a position to comment on whether the event had been cancelled.

“Further detail will be provided upon finalisation with all parties,” the spokesman said.

MotoGP in Thailand and Qatar postponed due to coronavirus fears