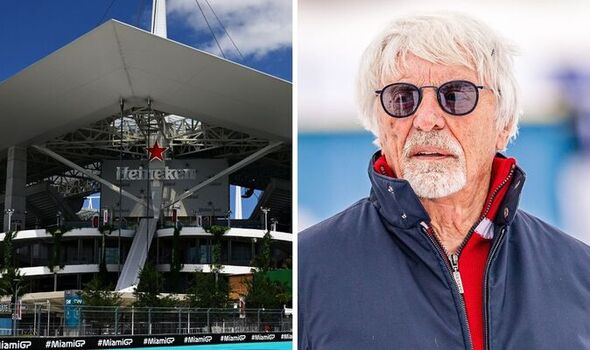 Bernie Ecclestone is far from impressed by the “American style” being pushed by F1 owners Liberty Media. The former F1 mogul has been outspoken on the direction the sport has taken since Liberty Media bought him out for £3.3 billion ($4.4bn) in late 2016.

Ecclestone was removed from his seat at the head of the F1 table after Liberty Media took ownership of Formula One Group. Speaking back in 2018, Ecclestone felt the new F1 owners could take the sport in the wrong direction.

He said: “Liberty could distort and ruin F1 because they have no experience. The FIA must be the master of the kingdom.” Liberty Media’s transition in taking over F1 coincided with Netflix’s hugely popular Drive to Survive series.

Now in its fourth season, with two more confirmed for the foreseeable future, the Netflix series has played a huge role in cracking the American market. The Miami Grand Prix this weekend has been a huge hit across the Atlantic with thousands of fans attending the new event.

There will also be a new race along the strip in Las Vegas in next year’s calendar, meaning there could be three races in America for 2023. There was a time under Ecclestone’s tenure during the entire 1990s where F1 didn’t host a single race in America.

But Ecclestone is not too impressed with the direction F1 is heading in under the current owners.

“They’re producing Formula 1: American Style,” Ecclestone told Bloomberg. “It may well be that it’s good, because so many stupid things come out of America and everyone’s happy, but it wasn’t the way I ran things.”

Earlier this year, F1 came to an agreement with the Circuit of the Americas to extend the contract with the Texas track. The United States Grand Prix will continue to be hosted in Texas through 2026 with hundreds of thousands of fans regularly attending the event.

At least a quarter of a million people are expected to be in attendance this weekend for the race in Miami. And F1 will be hoping the Las Vegas race next year can draw in similarly huge crowds.