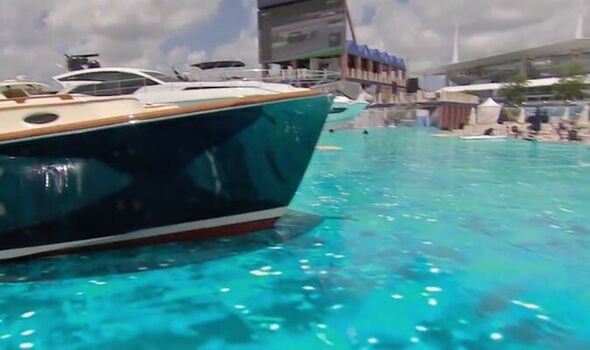 F1 fans have claimed they are ‘embarrassed’ by Miami’s fake F1 marina just days before the weekend gets underway. Organisers have placed a fleet of stunning yachts on top of flooring dressed to look like water.

@AlexDn09 was among those to complain on Twitter, quipping: “And Hamilton’s chance to win [the] Miami GP as much real as this ‘water’.” @Morbidluy_Thicc added: “The Miami GP circuit marina be looking like Super Mario 64 water.”

Another social media user said: “As an American F1 fan who has been an F1 fan for many years, I’m sorry. I’m truly excited to see more races my side of the world as it’s been practically impossible for me to go in the past and Vegas will be kinda close, but this is… this is sad. This does not represent us.”

@SupernovaMWN added: “Although I have no involvement whatsoever in the production of this, I can’t help but feel embarrassed for the spectacle. I found some aspects of Austin last year to be cringy, but this is far worse.”

@Aperta wrote: “I find this so funny, they want to be Monaco so bad.” However, some defended the idea, claiming the images were ‘environmentally friendly’ compared to using the real thing.

@grunty_mike argued: “Literally do not understand the problem people have with it. Just something Miami is doing different does affect F1 at all in any way. Feels like people are just nitpicking at irrelevant things. Looks cool imo.”

Another user added: “I think it’s more environmentally friendly to not be using real water. And what’s you lots problem with decorations at an entertainment event? No fun allowed at parties ehh?”

Sky Sports pundit Craig Slater was seen taking a fake swim in the ‘water’ as he showed it off to viewers. However, he did explain one of the reasons behind organisers installing the display in the first place.

He said: “It’s not real water at all. We didn’t get the permission to run the track around the bay so they’ve come up with this solution. I think it’s enhanced reality. They’ve got all the spectacular imagery of a marina without actually having one.”

The fake marina is situated between turns seven and eight, just before the back straight and DRS zones. The hospitality area will be run by MSC Cruises (USA), according to an official CGI flyover of the track released by the organisers last month.